Just because RHOC ratings are tanking without her doesn’t mean that Tamra Judge is going to let up on her former friends.

Shannon Beador totally ghosted her when they stopped being castmates. Tamra is still letting her have it.

Over the weekend, Tamra Judge spoke on the Poplitically Incorrect podcast about how she really feels about her ex-friend.

“[Shannon is a] nightmare," the former Housewife accuses. "[She’s] controlling, tries to produce, has fits, yells at them, calls them in the middle of the night, screams, those kinds of things."

All told, Tamra likens Shannon’s behavior with that of a “diva.”

Tamra and Shannon had a huge falling out early this year, but Tamra says that it wasn’t because Shannon made peace with Kelly Dodd — a reconciliation that she calls "bulls–t" and "fake."

“I’m not mad at all about that," she clarifies. "I’m mad that she just dumped me."

Tamra also spins a theory as to why Shannon made peace with Kelly. To put it bluntly, she wanted protection from her nightmarish castmate’s wrath.

“Everybody is afraid of [Kelly]," Tamra admits.

"So if you get on her bad side," she explains, "she’ll go after your kids, your business, your husband."

Tamra observes: "There’s no boundaries with her and Bravo can’t stop her."

Shannon has recently spoken about her Una Amiga status, but Tamra says that she’s just being "calculated" in an attempt to change the narrative.

“The only thing I said [in the media] is that she just stopped talking to me," she notes.

Tamra recalls: "Every time I called her she’d send me to voicemail."

"Now you have to understand," Tamra emphasizes, "this is a friendship I had throughout the years where we would talk multiple times a day."

"And I helped her out," she insists. "Was it annoying sometimes? Yeah, it was, because she is very, very needy."

"And," Tamra continues, "I would take her phone calls in the middle of the night."

"And when I was down and out and she was sending me to voicemail all the time," she expresses, "I’m just like, ‘Wow, this really says a lot.’”

Tamra did tell the world about how Shannon had ghosted her. When she did, she says, she finally received a message from Shannon — in the form of an angry text.

“She texted me and said, ‘Wow, Tamra! You could at least text me or picked up the phone,’” Tamra reveals.

She continues: “Everybody wanted to know, ‘What did Shannon do?’ I’m like, ‘She just stopped talking to me.’"

"And she can twist it any way she can," Tamra suggests, "but she’s not exactly coming up with an answer."

Tamra characterizes Shannon’s excuses: “She just says, ‘Oh no, that’s just their truth, that’s not true. Oh why would I do that.’"

"Well, why would you do it? She’s a master manipulator," she accuses.

Tamra then declares: "She’s a professional victim is what she is.”

Now, on the season premiere, Braunwyn Windham-Burke confessed to her alcoholism.

Tamra got to know Braunwyn pretty well (ahem) last season, and acknowledges that she saw that side of her.

"And then she showed up the last day with a bottle of tequila or vodka in her purse in the morning,” Tamra continues her recollection.

“And," she says, "she admitted that she had been drunk all night long and didn’t sleep.”

“On the way home from one of our trips," Tamra dishes, "she literally passed out on some passenger’s lap on the flight."

"And we thought, ‘Oh my god, she really drinks a lot,’” Tamra expresses.

She actually recently hung out with Braunwyn — but they did not delve into the new season, the first without Tamra in a dozen years.

"She did say, and she’s said it in the press as well, that she’s not speaking to anybody on the cast …" Tamra notes, confirming what Braunwyn already revealed.

"And I really felt bad for her," she admits, "because I don’t know what happened to make them do that."

Wanting to comfort her friend, Tamra offered her take: “And I told her, ‘Just know that when the whole cast is against one person, it usually makes the rest of the cast look like a–holes.’"

"They could have the best reasoning in the world," Tamra says, "but it really makes them look like bullies.”

Tamra does say that if the current estrangement from her castmates, which could cost her another season of the show, is getting to her, she’s not showing it.

“She doesn’t seem like she cares which is great," Tamra says.

"And," Tamra expresses, "I feel like she’s got a new lease on life."

She continues, observing: "and she’s happy and she’s surrounded herself with people that make her happy."

"And I think that’s probably the best thing for her,” Tamra concludes. We don’t disagree. 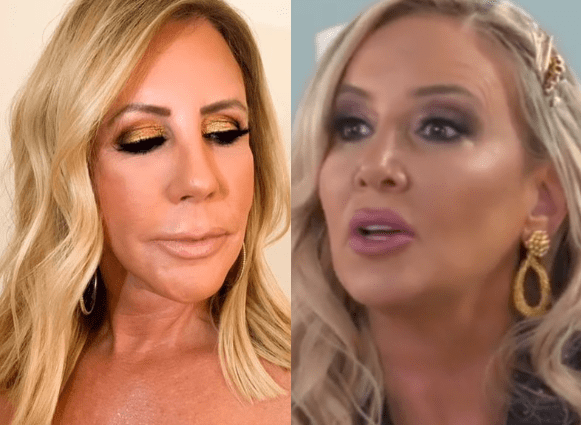