Now, Jill is at it again with her NSFW antics.

"Okay couples," Jill writes in her Instagram Stories. "If you haven’t heard of @datingdivas, you’re missing out!"

Jill has partnered with Dating Divas.

In a series of promotional Stories shared on Monday, she is advertising a book: A Year of Sexy Dates.

The number of games can be explained, because it includes “one for each month of the year."

Not bad for a woman who wasn’t allowed to date until she was married.

So what sorts of games does this book get?

"Hotzee dice game," is one of the suggested activities.

Another is “Positions dice,” where couples let chance decide how they pose when they bone.

Then there’s “Spicy Pictionary,” “Strip Never Have I Ever,” and “Sexy Scavenger."

We somehow suspect that "Never Have I Ever" is a lot less interesting when you’re raised in a deeply restrictive cult.

To be clear, the book seems to be advice for couples in general, and most of the activities could probably be used for polyamorous relationships, too.

But Jill puts her own spin on it.

She praises the book as a source of "Such fun spouse date games!"

Jill is making it clear that she, pesonally, only endorses these activities for couples who are married.

Presumably, only those married in Protestant Christian wedding ceremonies.

But Dating Divas knows that Jill has plenty of followers who would be interested, whether or not they meet Jill’s expectations.

Jill has given marital advice before.

"You both need this time together regularly (3-4 times a week is a good start)," Jill suggested to her married fans.

"When you may not be able to actually have intercourse for a period of time or for health issues," she acknowledged.

Jill continued: "find other ways to have fun and be intimate."

“Guard against fulfilling sexual desires alone," she advised. "Be open with your spouse about your desires and change things up to keep it exciting!"

She also suggested: "new lingerie (online is an easy way to buy!) as a surprise gift for birthdays, holidays, vacations, or whenever."

Then, of course, there was Jill’s snap of her anniversary plans with Derick.

It was clear that the couple was getting kinky for their time alone.

One of the items caused some minor uproar, however — because Jill had a copy of the Kama Sutra.

The most famous sex book in the world is also Hindu in origin, causing some conservative Christians to decry it as "other" or even "unholy."

Jill hastily clarified that she does not endorse non-Christian beliefs and insisted that her copy was redacted to only contain sexy advice, not spiritual advice.

It’s not a surprise that members of the Duggar family have sex with their spouses.

They’re a fertility cult. All of those kids came from somewhere.

Some are surprised that anyone is willing to discuss it at all.

After all, this is a family where the sisters are charged with saying "Nike" if a woman dressed normally comes around, directing their brothers to stare at their shoes.

But remember, as with many people in many religions, they view marriage as sacred and holy, so they see marital sex as also divine.

And in this case, of course, Jill is getting paid to talk about it. 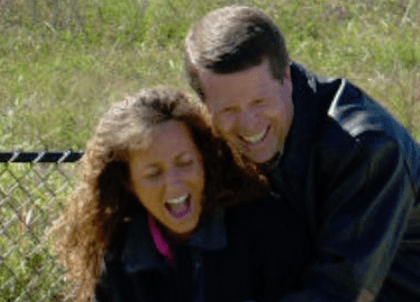