Teen Mom OG star Amber Portwood has been slamming Jenelle Evans since long before Jenelle decided to choose her monster husband over her own kids.

But aside from watching the dumpster fire of her former castmate’s life implode in national headlines, what is Amber up to these days?

She’s happily in love with Andrew — and wouldn’t say no to popping out another Glennon baby.

Amber Portwood spoke to Us Weekly about her life these days, and about her thoughts on having another child with Andrew Glennon.

"If that happened, I wouldn’t be mad," Amber admits.

"There are many things I would do differently with Andrew," she reflects.

"He’s my soulmate," Amber gushes. "And he’s a beautiful person."

Amber is quick to admit that Andrew has effectively ruined her for other men.

"I don’t see anybody else I could even, like, mesh with after him," Amber expresses.

Once you’ve known what true compatibility can feel like, it’s hard to imagine being lucky enough to dlick that well with someone else.

Amber adds: "I might have another kid with him."

So it sounds like whether she does that has more to do with whether she wants another kid, period, rather than with her relationship.

Because Amber and Andrew? She says that they’re rock solid.

So, she mentioned that she wouldn’t get married to Andrew. Does that mean that they’ve secretly tied the knot?

Amber says that no, they’re not engaged, explaining: "that’s up to Andrew!"

"I’ve been through a lot of stuff with men commitment wise," Amber understates.

Well, coming from his family, he may be one of the only dudes Amber has met who isn’t also a gold digger.

There was some controversy about how Amber and Andrew first hooked up.

She was with her sleazy ex at the time, and he was working on Marriage Boot Camp when she and Matt Baier had a huge fight.

Apparently he ran after her to offer her a shoulder on which to cry.

Over time, that shoulder became a penis, which led some to accuse Andrew of taking advantage of a distraought, emotional woman.

Not as many fans are still saying that these days, but a few still harbor doubts about Andrew’s good guy status.

Amber strongly disagrees with that assessment of her man.

“Honestly, I feel like it was meant to be, the way that how we met," Amber expresses.

To her, he was there right when she needed him, and she still feels grateful for that.

She adds: "It was just beautiful."

And so is their baby, James Andrew Glennon.

Now, plenty of Amber’s longtime fans would be delighted to see her welcome a new baby into the world.

They wouldn’t have felt that way when she was with Matt Baier, but they do now.

But keep in mind that she’s just saying that she is hypothetically open to another Glennon baby.

Right now, she probably has enough on her plate. 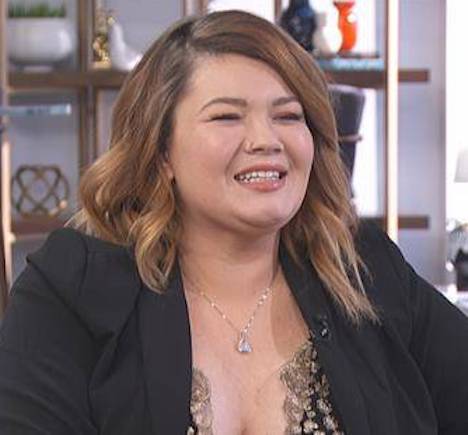 Amber Portwood to Fans: You’re All Jealous of How Rich I Am!