And no, we’re not talking about the fact that she’s still just as miserable as ever.

We’re talking about that big boxing match for charity that was supposed to go down tomorrow night in Atlantic City.

Everybody’s favorite former Teen Mom backed out of the fight last week because she felt like the people who organized the fight screwed her over.

Farrah — dear, sweet, delusional Farrah — believed that the promoter had promised her several plane tickets and hotel rooms for friends coming in to see her go up against her opponent, Hoopz from Flavor of Love.

When she figured out that that was dumb and wouldn’t be happening, she refused to fight.

It’s this whole big thing, and she could be facing a lawsuit for breaking her contract.

But still, the show is going on, with Mob Wives star Natalie DiDonato taking Farrah’s place.

And it turns out that some people are disappointed in that change of plans.

"Going to Atlantic City was supposed to see Farrah get laid the hell out by Hoopz thennn she dropped out! Still going to support our girl Hoopz tho!"

She also threw in the hashtags "scared sissy" and "grow a pair," because apparently she’s still in the sixth grade.

Catelynn is 26 years old, and no matter how much she dislikes someone, you sort of hope that by your mid twenties, you’ve outgrown this kind of immature behavior.

Lots of other people thought so too, so many that Cate disabled the comments on the post altogether.

But don’t worry, because some good people over on Reddit stepped up to offer their opinions on this mess.

"She puts her energy into all the most toxic things I swear," one person wrote. "Worry about yourself hun."

"It’s funny to me that she expects people to be nice and sympathetic to her regarding her various issues yet she can easily turn around and name call and bully someone who never even acknowledges her ass," someone else commented.

Along those same lines, another person said "Cate shut the f-ck up you don’t even have the balls to watch your own show because you can’t handle any sort of criticism."

These are good points, because Catelynn has spoken out very strongly against bullying several times.

She’s also refused to watch recent Teen Mom OG episodes, even though Tyler’s therapist recommended she check them out

And yeah, watching footage of an extremely difficult time in her life would surely be hard, but maybe Farrah struggled with committing to the boxing match too, you know?

There’s just no compassion at all here, and if she can’t be compassionate, she could at least be mature.

As one Reddit user pointed out, "She’s still riding on the Farrah hate train long after everybody else got the hell off."

How hard would it be to just ignore Farrah if she honestly dislikes her that much?

Another user had a different idea about Catelynn’s statement though.

"Any excuse to go on vacation, right?" this person wrote.

"Does Hoopz even know who tf Cate is? Acting like she still has a reason to go is so cringey."

The thing is that Catelynn is about five months pregnant, and she’s got a three-year-old at home.

As we’ve been seeing on the show, she and Tyler have been going through some pretty serious marital issues.

It also hasn’t been all that long since she came home from rehab, really.

And yes, she’s allowed to go on a little vacation, or even a big vacation.

But to go all the way to Atlantic City because she was planning on seeing Farrah "get laid the hell out" and now to support Hoopz, who we seriously doubt is her friend …

It’s all just weird, and not in a fun way. 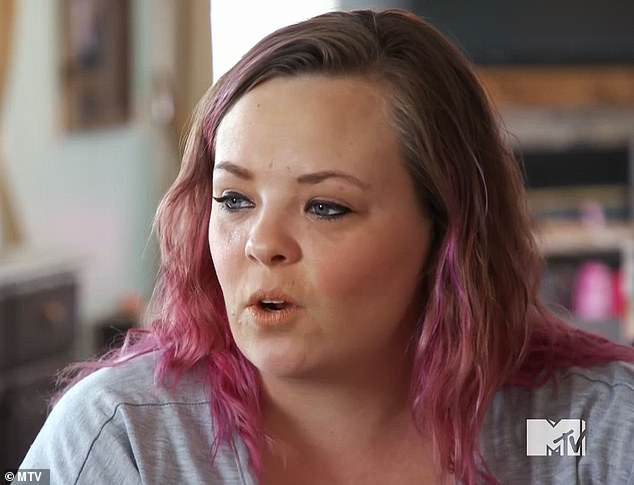 Catelynn Lowell: SLAMMED By Fans For “Selfish” and “Unsafe” …

But hey, Catelynn, have fun or whatever, OK?