The portions in which Catelynn and Tyler discussed their desire to have another baby rightfully received the most attention, but there were plenty of gems hidden throughout the episode.

After describing Farrah’s family as "a whole different breed" (an apt statement, if ever there was one), Baltierra claimed that Michael challenged him to a physical fight on the set of a TMOG reunion special.

“Michael is actually a very interesting character,” Tyler said on the podcast.

“I never actually told anybody this but he physically got in my face and wanted to fight me about two reunions ago!”

Not one to take anything lying down (unless it’s verbal abuse from his daughter, in which case, he smiles and asks for more), Michael issued a statement to The Ashley’s Reality Roundup, in which he offered his side of the story:

“The reason why Tyler ‘never actually told anyone’ is because it NEVER HAPPENED,” Michael wrote.

“Everyone knows that if that would have happened the production company and MTV would have aired it as a public relations stunt. The world knows that MTV films everything and everybody at all reunion shows.”

We hate to say it, as Michael is generally not to be trusted, but that’s a pretty solid argument.

As for Tyler’s claim that the on-set security pushed Michael onto a couch, Abraham says that scuffle only took place in Tyler’s mind:

"I have NEVER been pushed down on a couch by security at any reunion show filming,” Michael wrote.

“The only time reunion security had to do anything with me physically was when they were protecting me during the time that Matt Baier attacked and assaulted me three reunion ago."

Ah, yes. Who could forget the famous Farrah vs. Amber fight?

It really wasn’t all that long ago, so it’s pretty funny that Michael is acting like it’s just preposterous that anyone in his family would throw down in the presence of Dr. Drew.

Anyway, Killer Mike goes on to actually praise the Baltierras, and he claims that over the years, he’s formed a close relationship with both Tyler and Catelynn.

"It’s a shame that Tyler and Cate have to make up stories like this,” Michael’s statement continued.

"The last time I was face-to-face with them I shook his hand and hugged her to mend our relationship after the strain that Matt’s assault on me caused between everyone on the show.

"I’ve also gone to the extent of complimenting him (Tyler) as being an excellent father this last year repeatedly on social media as he cared for Nova during the time Cate was in rehab.”

Michael concluded his lengthy commentary on the matter by claiming that he and Tyler are two peas in a pod.

We’re guessing Ty won’t be taking that as a compliment:

"Tyler and Cate’s dad Dave are just like me– we will do anything to love, care and protect our daughters,” Michael said.

“It’s so sad that even after we (Farrah and her family) have moved on and have wished everyone the very best, the hate from others continues and there is no valid reason for it."

"We are extremely happy and living our lives in a healthy and positive way, why can’t everyone else do the same?”

Hmm … a surprisingly non-psychotic-sounding statement from a usually psychotic source.

Of course, Michael has successfully convinced himself that Farrah freakin’ Abraham is an ideal daughter, so it’s important to bear in mind that the man suffers from some pretty severe delusions.

Watch Teen Mom OG online to remind yourself of the many ways in which the Abrahams are not of this planet. 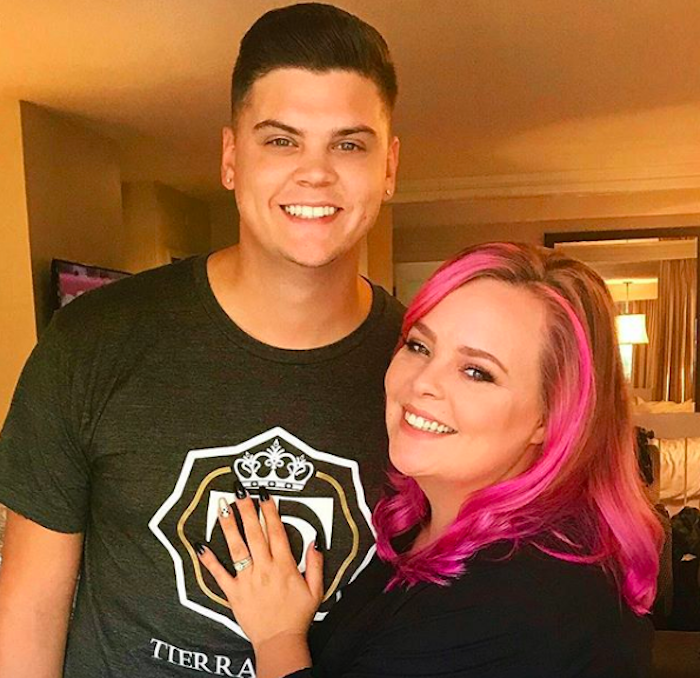