On the surface, it may not seem like Kim Kardashian and Richard Nixon have a whole lot in common, but dig a little deeper, and you’ll realize they’re more similar than they appear.

Both will be forever associated with scandalous tapes; both have complicated relationships with their mothers; and both understand the importance of a comprehensive enemies list.

Us peasant people might have one or two enemies – perhaps one Starbucks barista who always spells your name wrong, and another who always glares at you for walking across his freshly mopped floor – but the rich and powerful often have more foes than they can easily keep track of.

And that’s where the value of a well-organized enemies list comes into play.

Kim recently became a mother of three, and she says she’s in the best shape of her life these days.

She’s leveling up in every way possible for 2018, and apparently, that includes taking her pettiness to new heights.

And what does that mean for her carefully-cultivated catalog of adversaries?

Why, it means they get roasted with blue Valentines, of course.

Kim has a new fragrance out, and she’s promoting it by delivering samples encased in chocolate hearts to some of her celebrity associates … even the ones she doesn’t like.

Mrs. Kardashian-West posted a Snapchat video detailing her plan, and as you can, see the recipients in blue comprise a special class:

"I’m going to send them to my lovers, to my haters, to everyone that I think of, because it’s Valentine’s Day, after all," Kim said in the clip.

There’s Piers Morgan, Sharon Osbourne, Bette Midler, and Chloe Grace Moretz – who have all called out Kim’s nudes over the years.

There’s Blac Chyna and Taylor Swift (no big surprises there).

There’s Naya Rivera, Wendy Williams, and Pink, all of whom have mom-shamed Kim at one point or another (or at least they have in Kim’s eyes).

And there are some surprises in the mix, as well.

(Since when do Kim and Sarah Michelle Gellar have beef?)!

In all fairness, this might be Kim’s way of extending an olive branch – but we prefer to think of it as gloriously subtle shade.

Yes, the first non-Tide Pod-related trend of 2018 is officially here, so send a blue Valentine to your haters today! 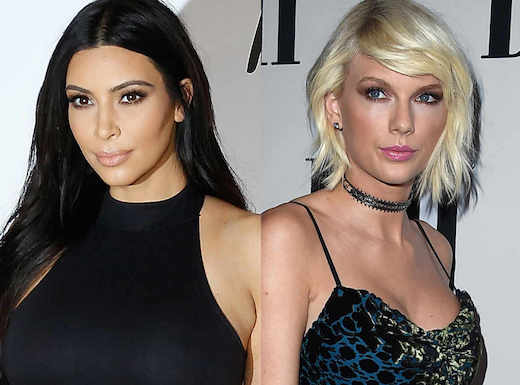