This morning, millions awoke to the shocking news that a gunman had taken the lives of 50 civilians and wounded as many as 400 more in Las Vegas.

The terrorist attack, which is now the deadliest mass shooting in U.S. history, took place at a country music festival in the city.

Singer Jason Aldean had just started performing and Jake Owen had just finished his set when bullets began raining down.

Paddock, shown above with his "companion," Marilou Dannley, is believed to have begun his attack at approximately 10:00 pm local time.

He was eventually located and killed by police in his room at the Mandalay Bay Hotel and Casino shortly after the attack.

Police were reportedly able to locate Paddock quickly due to the smoke from his weapon setting off hotel fire detectors.

Early reports indicate that he was not a member of any militant group, and was not known to hold any extremist political or religious beliefs.

Dannley, who lived with Paddock in Mesquite, about 85 miles from Las Vegas, was apprehended for questioning at 3:40 this morning.

Police have described her as a "person of interest."

It is not currently known if she’s being treated as an accomplice in the attack, or whether law enforcement simply wants to learn more.

In any case, reports indicate that several guns, including at least eight rifles, were found in the room rented by Paddock and Dannley.

“We have no idea what his belief system was,” Sheriff Joseph Lombardo said during a press briefing early this morning.

Denying online rumors that there were multiple shooters, he said, “Right now, we believe he was the sole aggressor, and the scene is static.”

Aldean, one of country music’s biggest names, reported that he and his crew are safe – and just as shaken, saddened and sick as any.

"My Thoughts and prayers go out to everyone involved tonight,” he wrote, clearly stunned, as a caption to the image on Instagram below.

“It hurts my heart that this would happen to anyone who was just coming out to enjoy what should have been a fun night.”

Aldean’s wife Brittany Kerr posted also on Instagram, saying, “We are safe… our angels were definitely watching over us tonight."

"No words for what happened," she added.

"Just horrific. Praying for everyone.”

Witness accounts are about what you would expect – unable to do justice to what happened as you read this, but terrifying nonetheless.

With 50 dead and more than 400 reported injured by local hospitals, the Las Vegas massacre is believed to be the nation’s deadliest.

The killing spree surpasses the 2016 Pulse nightclub shooting in Florida as the deadliest mass shooting in U.S. history.

Several media outlets have reported that the United States now averages one mass shooting per day in 2017.

Our thoughts go out to the loved ones of those killed and wounded in this tragic and infuriating attack.

We will have further updates on this developing story as more information becomes available. 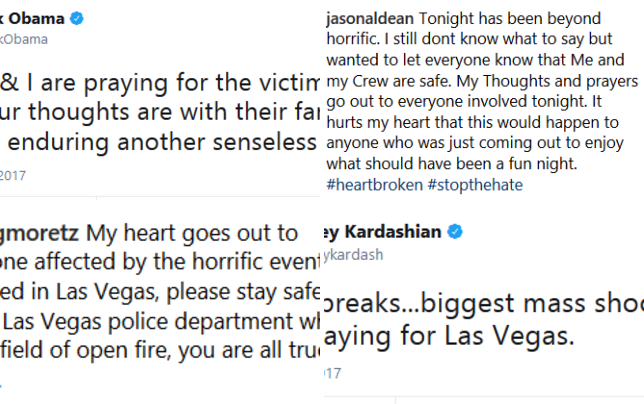