Just yesterday we were wondering if Jill Duggar’s husband Derick Dillard had come out in favor of LGBT rights after he liked a tweet.

That would have made sense — there are plenty of Christian conservatives who’ve grown up with LGBT friends and don’t see a reason to discriminate.

Unfortunately, we now know with certainty that Derick Dillard is not one of those conservatives. Not at all.

Religious beliefs are one thing, but it takes a special kind of person to publicly put a 16-year-old girl on blast just for existing.

But that’s what Derick Dillard saw fit to do, proving that he never deserved to have the awesome hair that he lopped off in the first place.

TLC, the network that continues to give screen time to the horror show that is the Duggar clan, tweeted a promo for one of its shows.

This time, for a show that’s been running for years — I Am Jazz, which follows Jazz Jennings, a teenage girl who works as an advocate.

The series follows her life as a transgender teen and also a great deal of her advocacy.

Unfortunately, Derick Dillard saw fit to tweet about it, quoting TLC’s promo and adding his own commentary.

"What an oxymoron… a ‘reality’ show which follows a non-reality. ‘Transgender’ is a myth. Gender is not fluid; it’s ordained by God."

In case we need to clarify this, trans folks are in fact real, and they’ve been around for as long as humanity has.

Unfortunately, that’s not all that Derick had to say, folks.

We guess that he couldn’t resist digging that hole this much deeper:

About a half hour later, Derick had started to notice backlash (we’ll get to the backlash in a moment) or maybe gotten cold feet about insulting a minor, so he tweeted again.

And … if anything, his second tweet made it worse.

"I want to be clear. I have nothing against him. I only have issue with the words and definitions being propagated here."

Deliberately mis-gendering a transgender person is an act inextricably linked to the targeted violence that transgender folks, and particularly trans women, face on such a frequent basis.

That violence — that causes trans women to lose their lives, so often to men they trusted or even loved — is hateful and dehumanizing.

And so is the act of deliberately mis-gendering a trans woman.

But don’t worry — while Derick Dillard did, unfortunately, get a few supportive responses from fellow bigots, the vast majority of the replies to both tweets were in the form of total condemnation.

We have a number of tweets for you, but rest assured that these are only a small sampling:

The first couple were just trying to correct him for mis-gendering Jazz.

"*Her. You wouldn’t like someone using the wrong pronoun with you. Please at least try and be respectful if you have nothing against her."

That’s phrased like a friend would correct another friend, right?

Others were understandably more heated.

"I love the way you put ‘him’ just to put some extra disrespect and hate in your statement. Very godly."

They’ve got a point.

And then replies started getting into the hypocrisy of the Duggars getting famous (and getting paid) thanks to reality television even when it’s part of everything that they condemn.

Not to mention the fact that I Am Jazz airs on the same network as Counting On.

"Bet y’all won’t leave your show. Y’all like that money way too much. Your ‘reality’ show skips around your bro in law touching his sisters."

Oh, did you think that Josh Duggar wasn’t going to come up? He absolutely came up.

"Exactly, hypocrites! If it truly went against their beliefs they would walk away from TLC for supporting it. But $$ speaks louder than God."

"Haha, just like the ‘reality’ show about Godly people who molest their sisters & cheat on their wives. Oh wait…"

Others think that Derick Dillard biting the hand that feeds him should be a sign to TLC that they should, well, stop feeding the Duggars and supporting their lifestyle.

They came after him specifically for going after Jazz Jennings — who, again, is only sixteen.

"Yes so much courage to attack a teenager from behind a computer screen…."

She’s probably heard everything you can imagine and worse before, because bigots are everywhere, but that doesn’t mean that more people should pile on.

And then came our favorite responses — where people went after Derick Dillard for his, um, shady missionary work.

Specifically, the fact that Derick and Jill asked for money from fans:

"And at least she isn’t pretending to be a missionary over seas leaching off donations and not providing an explanation of where they go."

"But then you may have to get a job instead of selling out your children on tv or scamming fans to give you money for your fake mission trip."

"Maybe you should quit TLC then."

We’re not sure why Derick decided to single out Jazz Jennings at this particular moment, but perhaps the timing isn’t a coincidence. 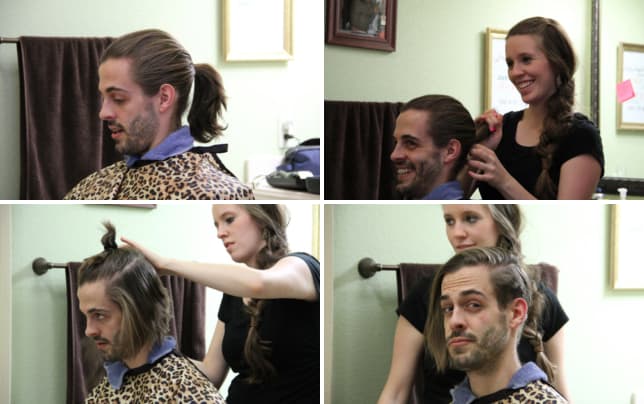 We can’t help wondering if he felt a need to tweet that after seeing that fans had noticed that he’d liked the aforementioned tweet.

You know … the one that mentioned that a person shouldn’t be fired for being gay (or for being a Christian).

Was he trying to set the record straight and make sure that everyone knows that he’s firmly on the wrong side of history and morality?

Or did he feel some pressure, from within or from his extended family, to double down on hateful rhetoric to preserve the Duggar brand?