Everybody knows that being a parent is hard.

But maybe, just maybe, putting your kids on leashes isn’t the best solution to your problems?

Clint Edwards’ blog is titled: No Idea What I’m Doing: A Daddy Blog.

That title is probably more accurate than he ever intended.

He posted the picture of his toddler daughter, Aspen, on a leash, and then defended the practice, saying that he’d never be able to keep his very active daughter safe without a leash.

The post went viral, but he’s still standing by it.

"I’ve written about leashes before and about the dirty looks we get using them, but we’d get even dirtier looks if we lost our child!" he tells People.

You heard it here, folks: you either put your kid on a leash or they get devoured by wild animals or abducted, apparently.

Look, we’re not saying that leashes are necessarily harmful.

And of course we know that there are some monstrous parents in this world who do so much worse.

We get that children are full of energy, and some are more prone to wandering off on impulse than others.

Their brains are still at very early stages of development, after all.

But parents have been holding hands with their children and even carrying them since, well, forever.

If anything, Edwards’ insistence that this is his only option — when, again, hand-holding has been an option since humanity’s ancestors first evolved hands — might be even more controversial than the leash itself.

One post shows him waiting in the car with a crying Aspen — who was upset that she wasn’t allowed to throw chicken nuggets in the restaurant.

We feel you, Aspen.

But he used it as an opportunity to talk about kids crying in restaurants to the irritation of other patrons.

It’s a super common occurrence — you go to a busy restaurant and there are just periodic shrieks from a small child.

But his point is that they all at some point were shrieking children in restaurants who had to be told "no," and that if little kids didn’t go to restaurants at all, they wouldn’t be learning restaurant etiquette.

And then wouldn’t go on to be adults who judge parents who bring their loud children into restaurants. It’s a beautiful cycle, right?

We see his point, but we’re still going to exchange grimaces with our companions the next time that we hear a piercing shriek when we’re trying to binge eat with friends.

As the internet collectively recoiled from his pro-leashing stance — it’s usually the sort of thing that you see on People Of Wal-Mart, not real life — his defenders came out of the woodwork.

Leashing your kids is apparently more common than any of us would like to think.

In general, the best parenting advice is that you shouldn’t be a parent if you aren’t ready to have children — and all that having children entails. 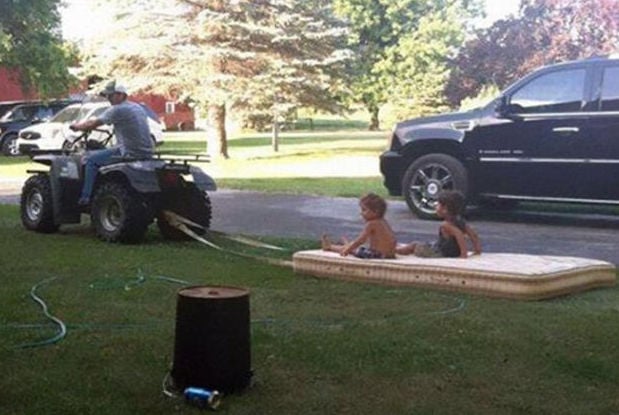 14 Dads Who Should Never Be Left Alone with Their Kids