On Sunday night, Jimmy Kimmel was at the center of the greatest mistake in Academy Awards history.

As most of the free world knows by now, Warren Beatty and Faye Dunaway were on stage toward the very end of this ceremony, prepared to announce the winner of Best Picture.

Only Beatty hesitated, confused by the contents of the envelope, which he then showed to Dunaway.

The veteran actress went ahead and told the crowd that La La Land had earned this honor, prompting that film’s cast and crew to take to the stage.

By just as one of the producers started to give an acceptance speech, someone with a headset started whispering in the ears of those around him on stage.

It turns out… a mistake was made! Moonlight actually won Best Picture!

Beatty and Dunaway were somehow given a duplicate envelope that contained the winner of Best Actress (Emma Stone from La La Land), NOT Best Picture.

A bit of chaos ensured before one of the La La Land producers very calmly and gracefully confirmed to the audience what had transpired.

As host, Kimmel tried to lighten the mood, cracking that he blames Steve Harvey for the miscue.

It was pretty incredible to witness. You really should relive the moment below:

Fast forward about 24 hours and Kimmel opened his late-night talk show on Monday by, of course, addressing this unexpected Oscars development.

“As I’m sure you’ve at least heard, La La Land was simultaneously somehow the biggest winner and loser last night,” he cracked, going on to joke that "It was the weirdest TV finale since Lost."

Kimmel also gave hilarious credit to Beatty for basically passing the confusing buck (that is, envelope) to his fellow presenter.

“See what Warren did there?” said Kimmel of the moment when Beatty hesitated prior to handing the envelope to Dunaway.

"He was confused, so he let her read the winner. In other words, Clyde threw Bonnie under the bus. I have to be honest … it’s one of the slickest moves I’ve ever seen."

Where was Kimmel when this was taking place?

"So the La La Land producers get up on stage, and a few of them – Jordan Horowitz, Marc Platt and Fred Burger – gave speeches," Kimmel explained.

"So now I am sitting in the audience watching the speeches. The plan is for me to end the show from the audience, next to Matt Damon, who – make no mistake – whatever confusion there was about who won? Matt Damon lost. He was a loser. He is a loser.

"But we’re sitting there, and we notice some commotion going on, and Matt says, ‘I think I heard the stage manager say they got the winner wrong,’ which is unusual, but you figure, well, the host will go onstage and clear this up.

Some viewers actually this entire thing was one of Kimmel’s his infamous pranks.

But he assured his folks that the mix-up was not any kind of hoax.

“As I walked off stage, people started to speculate that maybe I was pulling a prank," he said last ight.

"Which, trust me, if I had pulled a prank in that situation, I wouldn’t have just had the wrong winner’s name in the envelope when they opened it. There would have been a Bed Bath & Beyond coupon inside. It was not a prank.

"And by the way, the producers of La La Land were very gracious, on stage and off. They handled it very well. It was a very amicable custody arrangement. They didn’t even ask for visitation or anything."

Accounting firm PricewaterhouseCooper has taken responsibly for the wild gaffe and issued an apology.

In a statement released on their Twitter page, the company said:

“PwC takes full responsibility for the series of mistakes and breaches of established protocols during last night’s Oscars. PwC Partner Brian Cullinan mistakenly handed the back-up envelope for Actress in a Leading Role instead of the envelope for Best Picture to presenters Warren Beatty and Faye Dunaway.”

Why is there a back-up envelope? Who the heck knows?!?

“We wish to extend our deepest gratitude to each of them for the graciousness they displayed during such a difficult moment," PricewaterhouseCooper concluded.

"For the past 83 years, the Academy has entrusted PwC with the integrity of the awards process during the ceremony, and last night we failed the Academy."

It remains unclear whether the Academy will bring PricewaterhouseCooper back in this capacity next year. 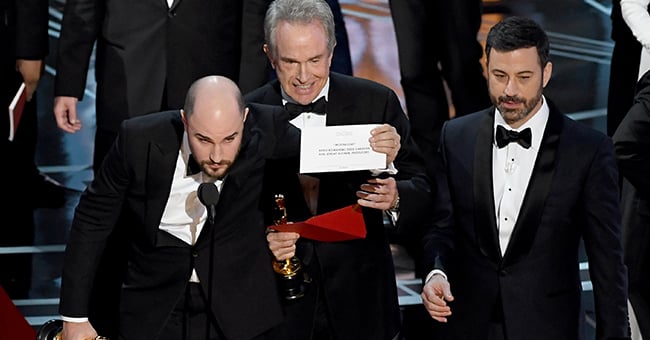