Okay, this actually might be the funniest thing a Kardashian or Jenner has done.

Khloe Kardashian and her sisters Kylie and Kendall Jenner must’ve been bored today, because they just pulled a pretty epic prank on a Hollywood tour bus – and Snapchatted the whole thing.

The three hopped aboard the bus wearing disguises rendering them completely unrecognizable and a helluva lot less glam than usual.

Khloe looked twice her age in a grey wig and plenty of stage makeup creating a wrinkled look – and even acted the part with a fake southern accent.

Kylie wore a fake nose, black wig with bangs and wire-rimmed glasses while Kendall sported a fake schnoz and a curly red wig.

The trio ate Subway and Khloe got chummy with the driver, telling him she was born in 1937 and hailed from Albuquerque.

To add to the mayhem, they even heckled the poor tour guide by demanding to go to Justin Bieber’s house, dissing the "Kartrashians" and shouting "That’s not true!" repeatedly when the driver brought up something he read about Kylie’s bae Tyga on the internet.

Eventually, the jig was up (possibly because Kylie was posting everything to Snapchat) and the paparazzi caught them, and the Three Stoogettes ran like they were on the lam from the feds.

Luckily, Kendall exercised great restraint and refrained from punching them.

This isn’t the first time Kylie has showcased her directorial skills on Snapchat.

After the tour bus prank, Kylie posted the photo above to Instagram and called herself the "queen of Snapchat."

And for once, we actually agree with her. 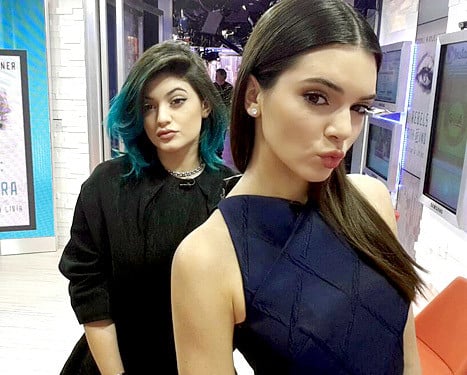