On Sunday night, Kanye West delivered a VMA acceptance speech that could only come from Kanye West.

He started by mentioning Taylor Swift and the infamous moment when he rushed the stage and grabbed the mic from her in 2009 (an action now referred to as "pulling a Kanye").

Production insiders say the plan was for Yeezy to apologize to Taylor, and then move on to a 2-minute (HA!) acceptance speech in which he thanked his wife, daughter, and the directors and co-stars who helped make his videos.

Instead he thanked no one, never mentioned his videos at all – and never apologized to Taylor.

Now, the source tells Radar Online that Taylor is pissed at Kanye for not sticking to the script.

“They had agreed to his talking points as part of the agreement of her presenting the award,” says the insider. “And then he went ‘in a whole different direction.’”

Swift had originally planned to stand next to Kim Kardashian throughout the speech, but her handlers nixed that idea just a few minutes into Kanye’s rambling ode to himself.

“She said she went into tunnel vision when he started going off script and that she tried to put distance between her and Kim,” the source says. “Her publicist had them kill planned shots to her once he went off course.”

Apparently, Taylor and her reps began to fear the worst and worried that Kanye would take a shot at her during his speech. Fortunately for them, Yeezus was only focused on Yeezus Sunday night.

“(Swift) said ‘it could have be worse’ but luckily it wasn’t about her even though he had agreed to apologize but didn’t,” the insider says.

Yes, that’s always an important thing to bear in mind when it comes to Kanye West – it could have been much, much worse. 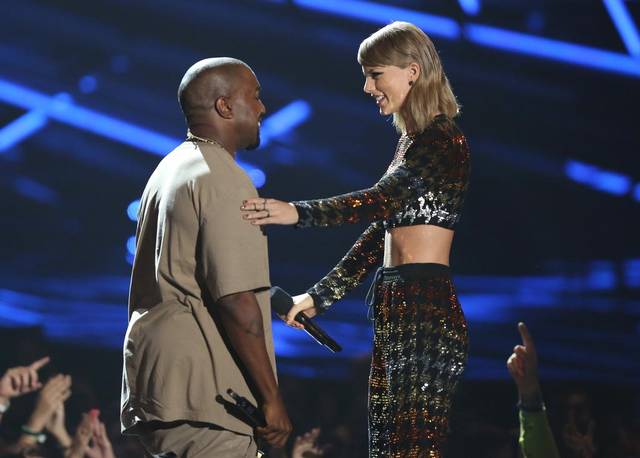