Kim Kardashian and Kanye West do have a lot of famous friends, but they were spotted hanging with some unlikely ones at Teyana Taylor’s party Monday:

On the eve of Kim Kardashian’s 34th birthday, she joined ‘Ye to support Taylor’s debut album, VII, which is being released by West’s record label.

Karrueche Tran and Chris Brown were among those in the crowd, along with Big Sean, Nelly, YG and other big names in the entertainment universe.

West and Brown have collaborated in the past, most notably on his “Deuces” remix, but it’s been a while since the last time they were seen hanging out.

Not sure if there’s any explanation beyond that, or if the two are actually tight (vs. just being at the same party one time), but they sure were chummy here.

Last year, Chris Tweeted some advice to West, telling him to “hire some security to take care of bulls–t” so he wouldn’t get in any more fights with paparazzi.

In that sense, both have had their share of anger issues, although ‘Ye has never beaten the crap out of his significant other, so he wins in that arena.

It was all about the music Monday, anyway, “This is about artistry and fighting for artists to get their visions out, like it says in the name of the label,” West said.

“It’s a collective of motherf—ers who believe in real music.”

“There’s never been someone on the label that has had to take something into her hands quite as much as this girl has had to do,” he said of Taylor.

“So I really want y’all to give her credit for fighting against an entire system…I’m just really proud to see her tonight, dropping her album. We had to fight for this.” 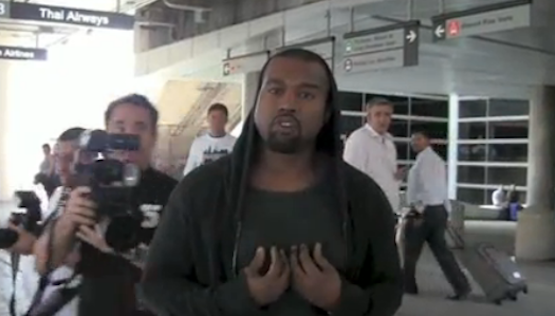