The continued popularity of Grumpy Cat is a testament to just how much the Internet friggin’ loves cats.

Countless memes and trends have come and gone since Grumpy first graced our lives back in 2012, but GC (real name Tardar Sauce [sic], for some reason) is showing no signs of slowing down.

Rumors of a Grumpy cat movie have been circulating for over a year, and today we received official confirmation that production is underway:

Yes, that’s a still from Grumpy Cat’s Worst Christmas Ever which will air on Lifetime in December.

Okay, so it’s not the Garfield-style big screen franchise that was originally planned, but she could definitely be doing worse than a made-for-TV holiday film. What’s your cat done today, besides bury his own poop?!

Oh, and don’t worry – GC has a speaking role. Yes, Grumpy talks in the film, but she can only be understood by the 12-year-old girl who adopts him. So together they have to save Christmas and remind everyone of the spirit of yada, yada, yada…

Clearly, the only good thing about this movie will be the presence of Grumpy Cat.

Sadly, Lifetime is a little bit late to the party. Not only has Tardar’s popularity begun it’s inevitable decline, but she totally already peaked over the summer.

We’re talking, of course, about the Peter Dinklage-Grumpy Cat photo that’s probably the best thing we’ve ever laid eyes on. How can anything Grumpy does for the rest of her life ever hope to compete with that? 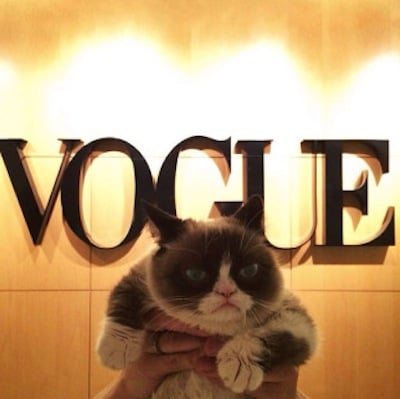