It took over five months. It consisted of over thousands and thousands of singers.

It introduced the world to the humor of Harry Connick Jr.

And now American Idol Season 13 has come to an end.

Following a theatrical, elongated finale that included performances by all three judges, did long-haired rocker Caleb Johnson come out on top? Or did piano-playing beauty Jena Irene earn the title?

SPOILER ALERT: We’re about to discuss the results of American Idol. If you’re spoiler-averse, avert your gaze.

After two hours of performances and theatrics, Caleb Johnson is the American Idol Season 13 champion! He bested Jena Irene to win, making his third time auditioning the charm.

Caleb Johnson auditioned for Seasons 10 and 11, making it to Hollywood each time. Each time he was sent home having made it farther than his previous year.

Lucky number 13 proved to be his season after taking a year off to focus on his music career in Asheville, NC and decide who he wanted to be as an artist. And who does he want to be?

Caleb has treated audiences to classic rock and roll numbers all season, earning himself a following which tonight crowned him their king.

What do you think, THGers? Did Caleb Johnson deserve to win American Idol? 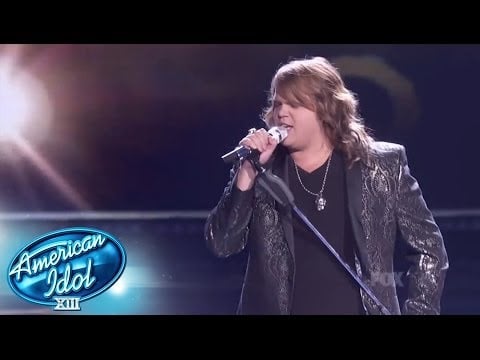