The Voice returned Monday with the first of the Battle Rounds, and it was a memorable evening. For the singers, it’s win or go home … or get stolen, of course.

Lest we forget, The Voice has the steal, which allows the coaches to save some of the best singers and continue the judges’ own battles a little longer.

So who’s in, who’s out and who’s the first real frontrunner this spring? 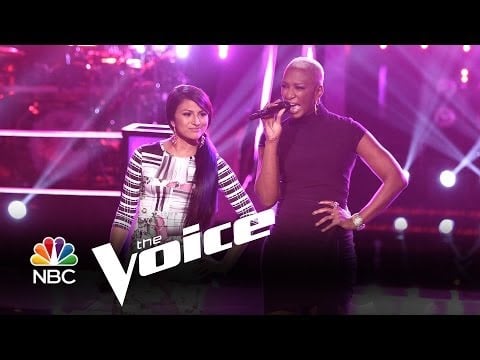 Sisaundra Lewis turned in the best performance of the night, dueling with Paula DeAnda on “Do What You Want” in a truly show-stopping effort.

Sisaundra walked away the winner, stunning each and every coach.

Before that, it was Biff Gore and TJ Wilkins from Team Usher. After their soulful rendition of “Aint Too Proud To Beg,” Usher took TJ … and Blake stole Biff!

Blake’s own singers, Jake Worthington and Lexi Luca, sang “It Goes Like This” and were mentored by The Band Perry. In the end, Jake survived.

Team Shakira singers Dani Moz and DeShawn Washington took the stage next with “My Kind of Love.” Ultimately, she selected Dani to stay on her team.

Rocker Kat Perkins and Patrick Thomson from Team Adam took the stage next, and Adam chose Kat, going with her overall strength in a difficult call.

The last battle of the night belonged to Jake Barker and Stevie Jo of Team Usher, to the Steve Winwood classic “Higher Love.” So who won this duet?

Stevie, because he stayed Team Usher, but before Usher even got to pick, Adam told the boys that he was going to steal whichever guy who was left!

Shakira and Blake tried to get Jake too, but he chose to go with Adam.

Who do you think was the best on The Voice last night? Tell us below!