Madonna and Stevie Wonder put on a performance at the 2016 Billboard Music Awards that they never wanted to put on.

One month after Prince died unexpectedly at his home in Minnesota, these veteran artists paid tribute to the iconic singer in a rousing seven-plus minute set.

Wearing the sort of sparkly, paisley-print purple suit that Prince made famous, Madonna kicked things off by also rocking a ruffled blouse and using a cane.

She sat on a purple throne as the monologue of Prince’s hit "Let’s Go Crazy" played overhead.

From there, with the assistance of a sparse backing band of strings and synths, the Material Girl started into "Nothing Compares 2 U," a track Prince wrote for Sinead O’Connor.

It was appropriate for this sentimental occasion.

The emotional tribute continued after the track concluded, as Stevie Wonder joined Madonna onstage to close the show with "Purple Rain."

As they singer the late legend – who passed away on April 21 – attendees at the purple-lit T-Mobile Arena in Las Vegas stood, with stars such as Rihanna and the Weeknd singing along.

"Thank you, thank you so much, ladies and gentlemen," Madonna said after the performance, adding:

"And most of all, thank you, Prince Rogers Nelson, for all that you have given us. Thank you. Good night."

Madonna and Prince were rumored to have been a romantic item way back in the day. They also collaborated on the 1989 single “Love Song.”

There was even talk at one point of the two headlining a world tour as a tandem.

Upon Prince’s death, Madonna said she was "devastated," writing on Instagram: "He Changed The World!! A True Visionary." 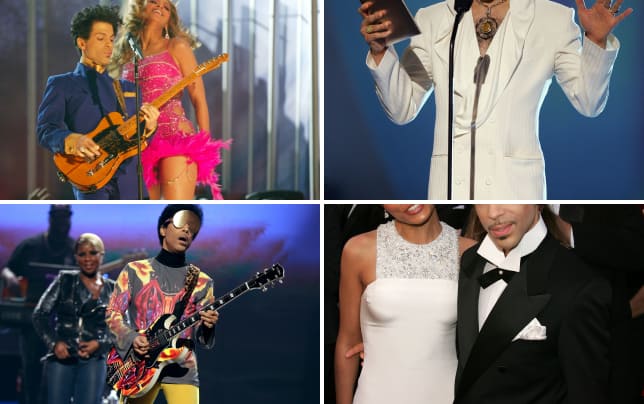 We continue to send our condolences to the friends, family members and loved ones of Prince.