Larissa Lima continues to shower her followers with extra spicy thirst traps as a reminder of what her OnlyFans has to offer.

Her most recent photos seem even more "biggie" … making fans wonder if she’s gone up yet another size on her bikini tops.

Larissa Lima is making her fans and followers’ eyes bulge out of their sockets with her most recent pics.

She’s been posting thirst traps — the ones just tame enough for Instagram instead of OnlyFans — for months.

But her latest photos are looking, as Larissa might call it, "more biggie," and you don’t have to take our word for it.

Whether she’s wearing a black string bikini, a neon top that looks like it’s from an ’80s movie set in the distant future of 2010, or even less, Larissa’s bust cannot be ignored.

Her photos are increasingly "in your face," and we do not mean confrontational.

We mean that her photos seem almost like she’s arching her back and, well, pressing herself into everyone’s faces. And people aren’t exactly complaining.

Between two different sessions this year, Larissa spent $72,000 on her new body.

One major surgery was filmed for 90 Day Fiance: Happily Ever After? in February. The other took place in early August.

But that, as we know, was not the end of her cosmetic surgery journey.

The August surgery took place before she was fired by TLC for her "scandalous" (relatively innocuous) CamSoda livestream.

In fact, Larissa was still recovering from the shocking news and the surgery when she and then-boyfriend Eric Nichols moved to Colorado Springs.

It was not long before she and Eric returned to Vegas for additional work from Dr. Smith.

Larissa’s truly massive breast implants in February may have been larger than recommended, but they were just the beginning.

The self-styled queen signaled to fans that she intended to push her breasts to new limits.

That’s no small thing (pun not intended but I might as well leave it), because recovery from breast implants can be brutal.

There’s a lot of muscle that gets sore in the process, plus a lot of skin that has to stretch.

But it sounds like it’s all worth it for Larissa.

Her "no pain, no gain" attitude has clearly led her to magnify her bust well beyond what anyone else had imagined.

Obviously, some of her fans have noted that this isn’t sexy to everyone. Many people have different tastes. Some of her fans want smaller boobs, or more real-looking ones.

But that’s sort of missing the point, isn’t it? Because they’re Larissa’s boobs.

Everyone deserves to have their flesh prison look exactly how they want it to, even if very few will get the chance to have that wish come true, or even come close.

Of course, clearly there is a sizable market that is all about Larissa’s outrageous Brazilian blimps.

Her OnlyFans account apparently gets her something to the tune of $40,000 per month. Even if it were just a quarter of that amount, she’d be making a very good 6-figure annual salary.

Clearly, Larissa is bringing many subscribers exactly what they want to see. Good for her! 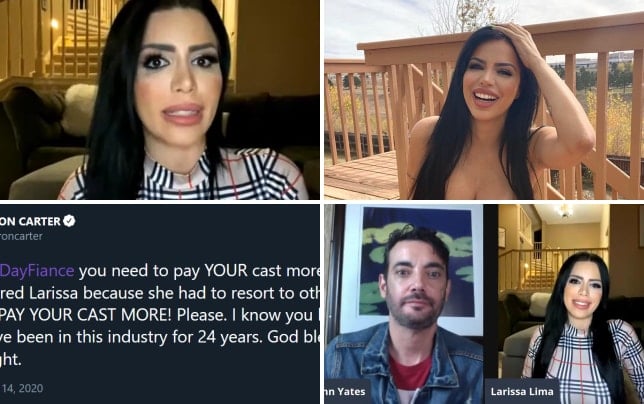