Kourtney Kardashian and Scott Disick are proving once again that they are the best in the business when it comes to co-parenting.

And people thought they were talentless? oh, please.

On Sunday night’s episode of Keeping Up With the Kardashians, the cordial exes opened up about their style of parenting when it comes to bad behavior.

Both agreed that spanking is not the answer and they also both disagreed on Corey Gamble’s old-school philosophy of scolding kids.

The episode featured a fight (which took place in a super crowded restaurant, btw) between Kourtney, Scott, and Corey after the 40-year-old mom revealed that her daughter Penelope had scratched their nanny in the face.

Kris Jenner’s longtime BF was, for some reason, very bothered by this piece of information and suggested that they spank and/or whip their children.

"If P scratched me, I’m whipping her ass," he boldly said in the clip.

He also asked the parents, "If you kid scratches me in the face, you don’t think they deserve to get popped?

Look, it’s 2019 and spanking your kids is a very debated topic. While most experts advise against physical punishment, many parents still turn to spanking as an effective discipline strategy.

However, Kourtney and Scott are not those parents. In fact, they strongly disagree with it.

"I definitely think our children’s behavior should be dealt with between Kourtney and I," Scott shared later in a testimonial.

"We’ve gotten this far and we’ve done a pretty good job, so I think we can handle it from here."

We think so too! I mean, when have they not proven to be successful at raising their three kiddos Mason, Penelope, and Reign?

Well, ok, Scot definitely had some slip-ups there in the beginning.

But now that he has gotten his act mostly together and he is putting his children first, they have mastered the art of co-parenting.

And separated households all around the world should be taking notes.

Whether it’s family vacations, holidays, or birthdays, Scott and Kourtney work closely together to make sure their children feel like a real family.

While some critics argue that the amount of time these two spend together is odd, Kourtney thinks differently.

"I know with my parents, as soon as everyone got along, life was so much easier," she explained, touching on her own experience as a kid with divorced parents.

"So as long as everyone’s OK with it, I think it’s amazing we all get to travel together."

Kourtney uses her lifestyle website Poosh to spread the message and offer her co-parenting tips.

"I feel like I can show a message, too, of like parents can get along and work together and travel together," she told Today.

"And I think it’s a good message to show other people. I am not doing it for that reason, but I think the positive things that we are doing is nice too."

One of Kourt’s best pieces of advice is to work on having the same rules and routines at both households.

"It helps when you do the same routines in both houses," she explained in a vlog to Poosh.

"Try and keep the same rules so the kids aren’t like, ‘We’re dying to go to dad’s because we get unlimited video game time,’"

But at the end of the day, all that matters is putting your family first.

"We’re just raising our kids how we would have raised them, whether we’re together or not," shared Scott in the same vlog to Poosh.

"Just because we’re not together, out kids should not suffer."

Ok, I don’t think anyone is out here worrying about the Disick children suffering.

They’ve been on more vacations than most people get to go on in a lifetime, but I think the real win for the kids is how lucky they are to have parents who put them first, above all else.

Who knows, maybe one day Khloe Kardashian and Tristan Thompson will master the art of co-parenting and give Kourtney and Scott a run for their money? *cue hysterical laughter* 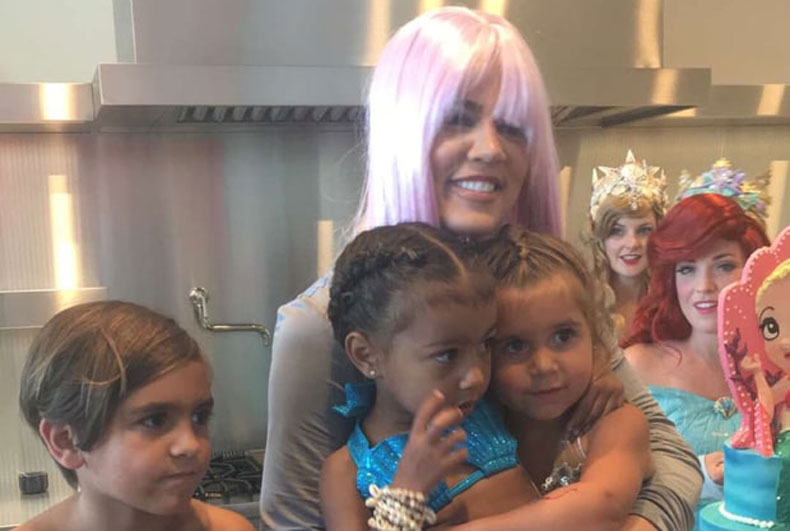