Kim Kardashian treated the world to the first photo of Chicago, True, and Stormi, dubbing the three baby cousins "triplets."

Unfortunately, hateful trolls said vile things — racist and colorist things — about baby True. Yes, there are people out there who will bully a literal baby.

Khloe is firing back — by posting new photos. But she has deactivated Instagram comments to tune out the hate.

Look at how cute True Thompson is in this photo! She is five months old and unspeakably adorable. (Those cheeks!)

But if you want to comment under this pic on Khloe’s Instagram, you cannot, because she has disabled comments on that image.

(And this isn’t the only picture, so you may need to get used to this)

Khloe does not explain her reasoning, but we can only imagine that the nasty things that people said about True are a factor.

Anyone who calls a baby "ugly" because her skin is darker than that of her two cousins cannot have anything worthwhile to say.

True does not appear in this powerful photo of Khloe, also shared to her Instagram and captioned "WORK."

Despite that, Khloe has disabled comments to this photo, too.

In fact, the only picture that Khloe has uploaded to Instagram this week without disabling the comments is a product endorsement post for meal replacement shakes.

We imagine that ads don’t go over as well when followers are frustrated or simply distracted by their inability to comment.

But … we wonder how long it will be before Khloe reactivates comments on any of her personal photos.

Having seen those repugnant messages for ourselves, we cannot blame her for reacting this way. If anything, it’s an underreaction.

Racism, as we are all too well aware, is alive and well. And so, unfortunately, is colorism.

While racism is a systemic system of oppression, colorism exists within race communities, and in some cases predated European colonialism.

In simple terms, colorism is assigning more value to lighter skinned people within an ethnic group than to darker skinned people. This can mean maligning South Asians or dark-skinned black people.

In this case, it means praising the beauty of biracial babies like Stormi and Chicago while insulting their cute cousin, True.

We can take comfort in the fact that True is, thankfully, too young to see this kind of hate for herself.

She is five months old, which makes her more than twelve-and-a-half years too young to be on social media herself without a parent’s supervision.

Unfortunately, unless our society becomes a radically better place in the next decade or so, this is the kind of vitriol that she will witness when she gets older.

Every parent wants to shield their child from the hate that exists in the world.

Right now, it’s all that Khloe can do to shield herself from the evil attacks on her daughter’s looks and hope that people who leave such comments take a long, hard look in the mirror.

What we are very glad to see is that, since Khloe is posting new pics of herself and True, she’s not simply fleeing from social media.

That, folks, would be what we call "letting the terrorists win." Instead, she’s staying on social media on her terms.

(Plus, it’s a hefty source of income and branding power for her)

Even if you don’t care for True’s parents, we should all support True. She’s literally a baby, you guys. She’s cute and innocent and deserves zero criticisms.

Because she is, again, a baby. 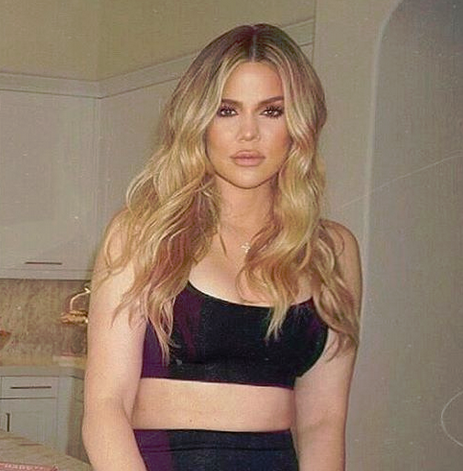