Donald Trump claims to have won the war on Christmas.

So now he can maybe turn his attention to the war against his wife.

Indeed, the First Lady is under attack at the moment after sharing a rather unique selfie on Instagram with her followers.

In an attempt to celebrate this special season, the 47-year-old tweeted the picture on Monday using a Christmas-themed filter that included a Santa Claus hat and dancing golden reindeer.

It was snapped at Mar-a-Lago, President Trump’s self-described "winter White House" in Palm Beach, where the first family is spending the holidays.

Before we move on to the criticism Melania has received for the snapshot, take a look at the image in question below.

What do you think? Can you see what the fuss is all about?

But others had a lot more to say.

Disgraceful for a First Lady, Christmas or not. You look like a model on a photo shoot for the front page of Hustler.

I’m sure the elderly and poor will appreciate this photo given how you and hubby don’t care about them, only your millionaire friends at Mar-a-Largo.

Incredibly tacky and an insult to the position of First Lady. #embarrassing #trumpba

It’s not too hard to see why people are having a problem here, right?

This picture does not exactly scream "CLASSY FIRST LADY!"

Then again, is it the job of a First Lady to be chock full of class at all times?

This isn’t the first time Melania Trump has garnered backlash in relation to Christmas.

Folks on the World Wide Web were equally savage about her holiday decorations this year, as she chose a different color scheme for inside the White House than one might expect for Jesus Christ’s birthday.

After the White House unveiled this year’s Christmas decorations – a collection titled “Time-Honored Traditions” that included 71 wreaths, 12,000 ornaments, and 18,000 feet of lights – designed by Melania herself, trolls on the Internet deemed it creepy.

But while Melania has also heard it from haters for certain pieces of attire she wears and for simply stealing from Michelle Obama, America doesn’t hate her as much as it hates her husband.

According to a recent CNN poll, 44 percent of citizens hold a positive view of the First Lady.

That’s considerably more than the percentage of rational people who hold a positive view of the President.

Overall, most voters just feel bad for Melania, who reports have indicated is very miserable at the White House.

No wonder she may or may not have hired a body double to stand alongside The Donald on occasion.

Click below to see what we mean and then ask yourself;

Would you blame Melania is this were true? 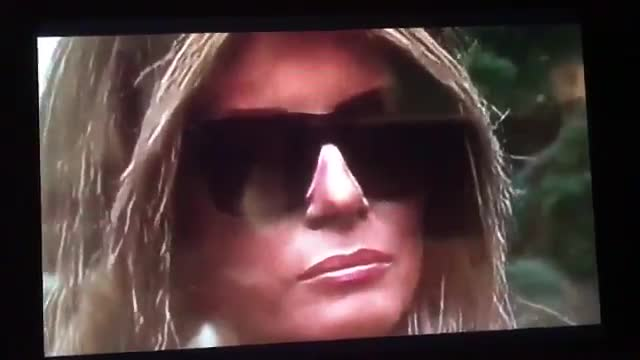 Melania Trump Body Double Conspiracy Theory Surfaces During Speech: Could it Be!?