In case that horrible segue did not make it obvious, Ciara got married to Russell Wilson today.

According to E! News, the famous tandem exchanged vows in front of close friends and family member at the Peckforton Castle in Cheshire, England.

Jennifer Hudson was among those in attendance at the ceremony, sharing the following photo of her gorgeous gown for the occasion and writing as a caption to it:

"I got the walking down the stairs part in this dress ! Now I really gotta figure out how to walk back up the stairs!"

Guests and the soon-to-be newlyweds all gathered on Tuesday night for a rehearsal dinner, with Wilson taking to Twitter earlier in the day to express his gratitude.

"Overflow of Blessings! God is so good!" he wrote.

The singer and the quarterback got together last year, much to the chagrin of Ciara’s baby daddy, Future.

The rapper has made it clear that he isn’t thrilled with his ex-girlfriend being in love with Wilson, even going so far as to possible threaten murder.

According to a lawsuit filed by Ciara, that is.

"Yay! I’m so excited," Ciara wrote in response to this photo several months ago. "God is so good."

For his part, Wilson wrote at the time:

"She said Yes!!! Since Day 1 I knew you were the one. No Greater feeling… #TrueLove @Ciara."

Wilson and Ciara also vowed awhile back not to have sex until marriage, so… yeah.

The quarterback is likely enjoying the best deep pass he’s ever thrown right about now. If you know what we mean. 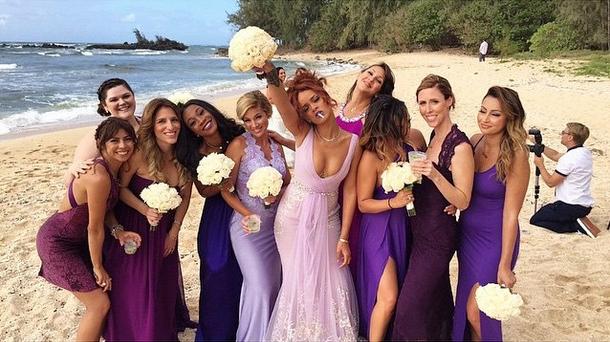 12 Stars Who Have Served as Bridesmaids