It wouldn’t be an official celebrity relationship if one party wasn’t accused of cheating with another famous ex.

So I guess by that measure, this means Zayn Malik and Gigi Hadid have reached "official" status. Why?

Because Life & Style reports that the former One Direction singer has been caught texting his ex-fiance Perrie Edwards.

“They were lying in bed together when Gigi noticed that Perrie had texted Zayn,” says the magazine.

“And Gigi saw [on his phone] that they’d been in contact. Gigi couldn’t believe Zayn would do that. She’s second-guessing the relationship.”

Maybe she should’ve taken her friends’ advice back in December, when they suggested that she dump him for being a dork.

"Her friends do not quite understand what the attraction is," claimed an insider.

"He is not her usual type, he doesn’t share her sense of humor or ease with people [and] he’s a little more self-aware and awkward."

What do you mean not her usual type? The woman dated Joe Jonas last year, who is basically Zayn with slightly more prominent eyebrows.

Zayn broke his engagement to Perrie last year and was kind of a jerk about it when he dissed her on Twitter.

Is he missing the Little Mix singer? Should Gigi be concerned?

Is the end near for Zigi? Are you as shocked as we are?!

No matter what happens, let’s all look at the bright side:

At least they’ll always have this steamy make-out video as a memento of their time together. No one can ever take that away from them. 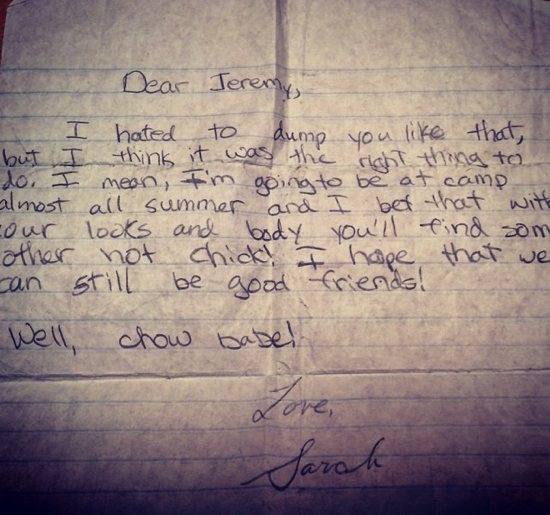 15 Most Absurd Breakup Letters Ever