It’s shorter, it’s glossy and it’s made of unicorn poop.

Today in London, the Duchess of Cambridge sported a shorter ‘do as she and Prince William prepared to take part in ICAP charity day, where the couple helped raise money for their chosen charities by boosting trading volumes and closing deals.

The Daily Mirror‘s Lynne Hyland reports that Catherine recently had her hair cut by Richard Ward of the Richard Ward Salon, and would like to take a bit of credit for getting the same haircut as Her Royal Highness (by Ward himself) a few days before.

Ward has been doing both Catherine and her mother, Carole’s hair since the former went by "Kate Middleton."  The salon is located in London’s posh Chelsea neighborhood, where the Middletons own a flat.

Ward also did Catherine’s hair for the royal wedding in April 2011.

"Richard is the soul of discretion when it comes to his most famous client (he can say he does her hair but not give away anything else, which is pretty wise considering we girls can’t resist telling our hairdressers EVERYTHING)," Hyland wrote in her column.

"I was gobsmacked because Kate’s hairdresser Richard Ward had done the very same haircut on ME first, just days before the royal chop."

Hyland revealed that Ward made his way to Kensington Palace for the private appointment, and assumed that she "was the guinea pig for Kate’s new do."

Ward explained to Hyland that a shorter cut makes life much easier, especially for working moms.

It’s easier and quicker to dry and style, which is good if you’re a mum," Ward told Hyland, referring to her own two children.

"There’s not much point in growing your hair beyond a certain point if fine or damaged. Cutting off the dead ends won’t make your hair look shorter, in fact having nice blunt ends will create the illusion it’s thicker."

I’ll take an illusion of thickness any day if it even a grain of comparison to Catherine’s hair.

Ward also explained the benefits of a "gringe" (a grown-out fringe) that he gave Catherine.

"A gringe is great if you want to do something different with your hair but don’t have the bottle or time for a dramatic change," Ward told Hyland. "It’s really flattering, it’s anti-ageing and it softens the whole face." 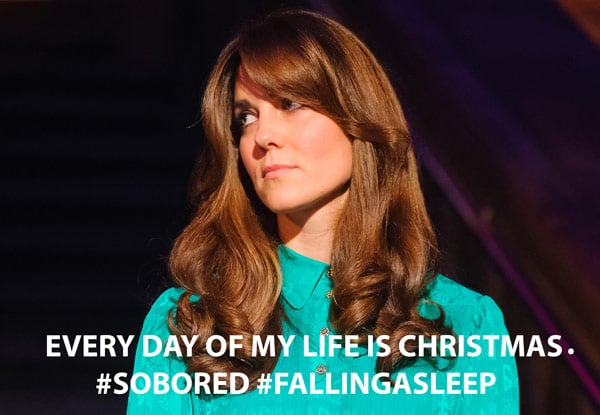 14 Times Kate Middleton Did Not Approve of Your Christmas Gifts

(thanks to What Kate Wore for the tip!)