Last night, Kourtney and Khloe Take The Hamptons closed out its first season in memorable fashion. For us, at least. Some of the cast members may not recall much.

Between Khloe and Kim Kardashian getting wasted and earning a harsh rebuke from Kourtney, and Malika Haqq trying to get to first (and second) base with Khloe?

It was an eventful, boozy night, and there are plenty of reasons to watch Kourtney and Khloe Take the Hamptons online if you missed it. Like these 12 classic scenes: 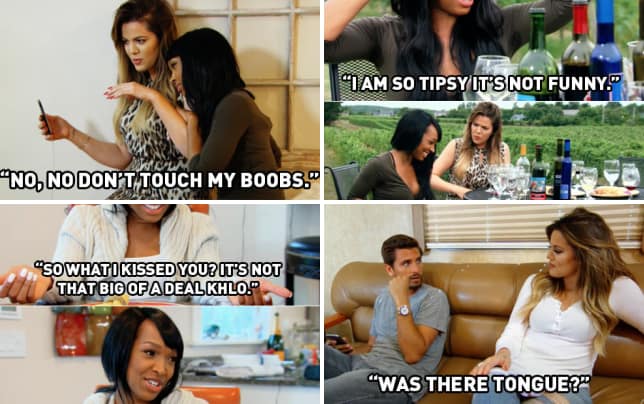 Khloe’s best friend of may years joined her and Kim in getting drunk at one of Long Island’s famous wineries, which sounds like some innocent fun.

That wine turned into liquid courage for Malika Haqq, though.

Malika basically tried to make out with, and feel up, Khloe, leading to some serious awkwardness on Kourtney and Khloe Take The Hamptons Season 1 Episode 10.

How did she explain it away later? Did they work it out?

Meanwhile, Scott Disick was forced to take care of Khloe after she got sloshed – a little role reversal for sure – and given all he’s been through this season?

A confrontation followed in which the mother of two (now three!) tore into her sisters for getting drunk around Scott, and Khloe gave her a piece of her mind.

In the end, tempers died down, but it got heated.

Between Scott’s epic meltdown and dramatic trip to rehab, North West’s birthday, Khloe’s birthday, and French Montana (in general), this season had it all.

With simmering tension boiling over and just enough heart, the finale served as a perfect conclusion for the Kardashian krew’s summer on the east coast.

Click through the classic quotes above to see why, then see this bonus gallery of Lord Disick’s douchiest moments (we had a lot to choose from) below: