Is Juan Pablo Galavis the worst star of The Bachelor in 18 seasons?

While The Bachelorette or The Bachelor finale typically prompts a lot of excitement regarding who the star ends up with, last night’s debacle was, well …

A debacle. There’s really no better word for what transpired.

The finale pitting Clare Crawley against Nikki Ferrell saw the former absolutely disgusted with him and the latter receiving the most apathetic final rose ever.

The “Worst Bachelor Ever” buzz began on Twitter early and often last night, and not just because he didn’t propose. It’s the general way he conducted himself.

Says an insider close to the ABC reality show’s production:

“Everyone is definitely ready for Juan Pablo’s season to be over. Producers felt like they were putting out fires left and right with him, starting with the gay comments.”

“He used the ‘second language’ excuse a lot, no one is really buying it. Two girls chose to leave in the top six. When has that ever happened before?”

“That should be indicative of what we were working with.”

Indeed. His stock began tanking early in the season, when Juan Pablo made remarks against the idea of having a gay Bachelor star on the show one day.

I Like You a Lot: The Bachelor Season Finale Pics

Sharleen Joynt and Andi Dorfman left of their own volition, with the latter accusing Juan Pablo of being self-absorbed and never asking her about herself (below).

He also displayed hypocritical behavior, holding off on kissing some women out of “respect” for his young daughter, Camila, then likely banging Clare in the sea.

Not only that, he “slut-shamed” the would-be finalist for putting HIM in that situation … then on the finale, said something so sexually offensive that she wouldn’t repeat it.

Clare wasn’t just crushed at losing. She was devastated at the fact that she wasted her time with a guy she felt she never really knew or cared about her.

Finally, after his lame non-proposal to Nikki Ferrell, on the After the Final Rose special, he acted like a self-righteous dick to Chris Harrison. Icing on the Douche Cake.

You tell us: Is Juan Pablo the worst Bachelor ever? 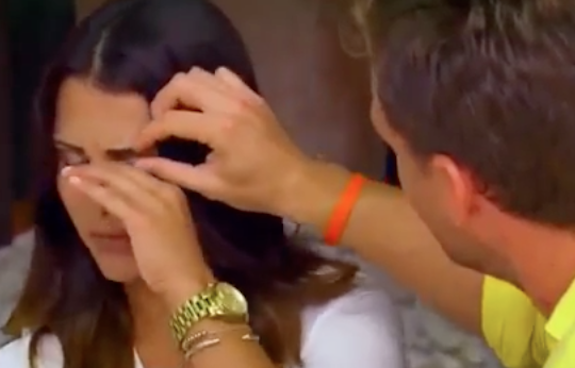