Britney Spears officially launched her Las Vegas residency on Friday night, and music critics are pretty sure that she lip-synced the entire performance. 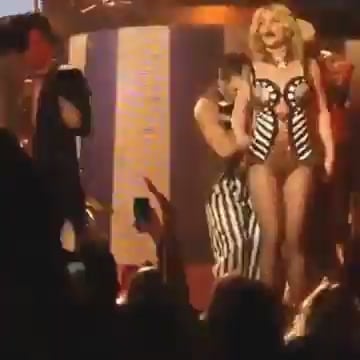 This is not a surprise, as it’s what Britney Spears does. But her manager, Larry Rudolph, previously stated that Spears would be singing live, claiming:

"There might be some numbers where she’s full out dancing with a (vocal) track underneath her, but there won’t be any lip-syncing across the board."

However, observers at the Planet Hollywood Resort and Casino in Sin City over the weekend said she was in fact lip-syncing across the board.

So maybe that’s why Katy Perry was not impressed?

Excerpts from some reviews of her opening night:

Rolling Stone: "While the show’s producers claim Spears is singing along with backing tracks of her own voice, there was little evidence Britney sang a live note."

L.A. Times: "The singer’s presence felt so diminished – her dancing a tentative shadow of what it used to be, her vocals apparently lip-synced for the majority of the show."

Billboard: "The vast majority of the show was lip-synced; only occasionally were seemingly live vocals heard. There was a certain thrill in actually hearing Spears breathing into the mic – however infrequent."

USA Today: "These club-oriented tunes all require such different effects that her voice surely had to be run through computers to correspond with the tone of what was recorded in the studio."

That last one is more diplomatic, at least.

It isn’t the first Britney Spears lip-syncing "expose" you will read. Nor will it be the last. Remember the isolated vocal track that leaked a few years ago?

The question is why anyone is surprised, or cares at this point. Lots of artists do it, and it’s hardly a mystery or an art of deception on her part in 2013-14.

Britney Spears’ actual singing has never been award-winning material, and anything after her 2007 meltdown should be viewed through a different lens.

She is what she is at this point.

Like many longtime fans, Miley Cyrus likes to grind to her music. People will pay to see her dance a lot during a sort of risque Vegas career retrospective.

Whether she sings live or not is not up for debate. She doesn’t. Hardly at all, if at all. If you don’t like the fact that she doesn’t, then don’t go see the show.

If you don’t mind, just enjoy!