Last week, Amber Portwood announced that she was leaving social media because of "bullies" who dared to mention that she’s a domestic abuser.

Now she has returned to express that she is broken-hearted. Did Dimitri finally leave her?

Amber Portwood has fans wondering what is going on in her love life.

Amber has been in a relationship with Dimitri Garcia, her Belgian bae, for many months now.

But as you take a look at her surprising new post this week, things are looking grim for the couple.

Before we get into Amber’s caption, we should talk about the image itself.

The image depics a stylized heart made of tangles of jagged metal.

The heart appears to be broken or in the process of breaking, with pieces of scrap drifting away from it.

"Sending love to my amazing followers," she added, "who have been here since day one throughout all the struggles."

Amber’s caption concluded: ‘Goodnight sweethearts! I’ve been up for 2 hour’s so hopefully I’ll go back to sleep now. Thank’s for the help [loves]."

Are Amber and Dimitri over?

Some fans are concerned. If we look at broader context, perhaps the truth will begin to take shape.

Amber and Dimitri made their TV debut in April, but had of course begun dating months earlier.

In June, Dimitri confirmed that the two of them were speaking regularly — and had been separated for months due to the COVID-19 pandemic.

Regular phone conversations are great, but it’s not the same as seeing one another in person.

Did being separated by an entire ocean finally end things for the two of them?

After all, not everyone is cut out for a long-distance relationship, as many people who have attempted LDRs can tell you.

The first hint that Amber wasn’t speaking about a breakup was, of course, that Dimitri himself "liked" her post about disappointment.

Sometimes, an ex will "like" a post like that, but more often than not, they won’t … especially since a lot of people block or at least unfollow exes.

The other clue, however, is that Amber is not the only one expressing bitter disappointment on social media.

On Wednesday, July 29, Dimitri made a post of his own.

In this image, we see Dimitri’s passport, which is tucked into an already packed bag.

"Put on your mask," his message shares.

Our guess — and we don’t think that this is too much of a stretch — is that Amber and Dimitri had tried to make plans for him to come and see her.

However, travel restrictions — either by the US or Belgium, most likely — had caused those plans to fall through.

Right now, the US is the "hot zone" in terms of COVID-19 infections and deaths.

With Federal leadership amplifying deranged conspiracy theories instead of doing anything to actually help Americans, it is only going to get worse.

This may mean that Amber and Dimitri cannot safely see each other for months, or longer.

There may come a time when Dimitri can come to see Amber in the US, but may be barred from returning to Europe.

Americans are barred from many places in the world right now, because we are one of the few nations that catastrophically failed to get a hold on things.

We hope that Dimitri makes wise choices about whether or not to potentially condemn himself to being Amber’s guest for months or longer.

As past boyfriends have discovered, Amber’s behavior towards them can change radically.

A guest with no other place to go, unable to return home, could be particularly vulnerable to someone who has physically abused multiple partners.

We hope that Dimitri remains safe — from COVID-19, and from other things that may harm him. 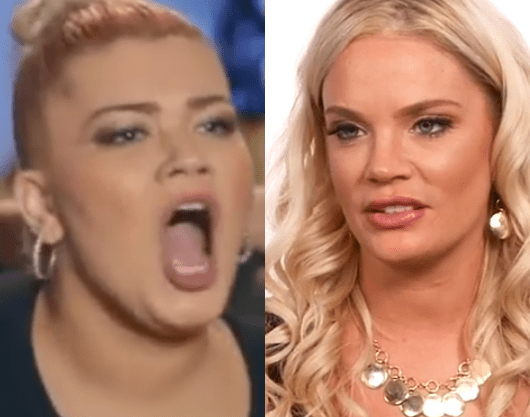 Ashley Martson to Amber Portwood: Shut Up About 90 Day Fiance, You Knife-Wielding Maniac!