Teresa Giudice is finally putting it all out there.

The longtime Bravo standout isn’t remaining silent and she isn’t pretending as if her marriage only just fell apart.

On Wednesday’s episode of The Real Housewives of New Jersey, Teresa accused estranged husband Joe of cheating on her.

We can’t say for certain whether or not this happened, but rumors of Joe’s infidelity have been floating around for months.

This marked the first time Teresa ever said the allegation out loud in a public setting, however.

Speaking to nearly all her co-stars in a setting that definitely was not orchestrated and/or scripted, whatsoever, Teresa went off.

She said she found a second cell phone that belonged to Joe and that she thinks he slept with his ex’s sister about 16 years ago.

"I have a lot of resentment," Teresa told the group, battling tears and later adding in a confessional:

"It took a long time, and it still is really hard for me to admit, but I owe it to myself to open my eyes to it."

Teresa also said she believes Joe cheated on her far more recently, but failed to elaborate on why.

Whether she really thinks this or when the newer infidelity may have taken place, we may never know.

(Joe and Teresa separated in December after two decades of marriage and four daughters together.)

This brings us back to Wednesday night and Teresa appearing on The Real Housewives of New Jersey.

Specifically, on the after-show alongside a producer and her co-star slash childhood friend Dolores Catania.

Teresa once again mentioned Juicy’s alleged second cell phone and how she asked Joe about it.

"He just said it was to talk to this one person because they grew up together," she recalls.

Catania was left seething over the whole thing, turning to Teresa and claiming this other woman "went out with Frank, too, okay?"

"Yeah, she gets around," Teresa responded, as both women shook their heads in disgust.

To make matters worse, and sort of harder to believe, Teresa added that the mistress was also "training me at the time."

"I never had proof. I asked!" she continued.

How did this woman justify her contact with Teresa’s then-husband?

Giudice didn’t say on the program.

The excuse Teresa claimed she got from Joe?

He was simply "helping" the lady after her divorce by "trying to sell her house." Or that’s what he told her in any event.

Teresa believed it outwardly and locked away whatever hurt or sadness she felt to keep the peace and her family intact.

She went on to have three more kids with Joe.

"Listen, I don’t think it’s news to anybody’s ears that Joe was cheating on Teresa," her sister-in-law Melissa Gorga said in a show confessional this week, reiterating what we said above:

"The news here is that Teresa’s finally admitting it."

Joe, of course, is now living in his native Italy as he awaits the next ruling on his final deportation appeal.

He continues to drool over Teresa from afar, but has also leveled a serious allegation against her as well.

As summarized below in case you forgot, Joe also told Andy Cohen and the world that Teresa cheated on him: 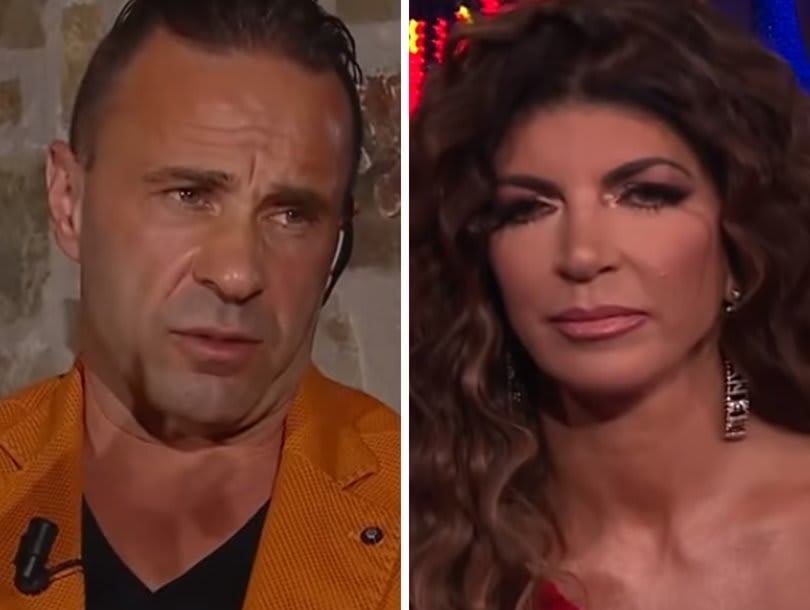