American Idol is coming back, but producers doubtless want to make certain that it doesn’t seem like the same-old show that ended just a few years ago.

As it turns out, they may have part of that solution lined up. And it’s bound to be controversial.

What would you guys think of Kim Kardashian sitting at the judges’ table? Because apparently that’s something that at least one big name from the show really wants to see.

You know in fantasy stories when there’s an ancient evil that used to threaten the kingdom or whatever, but over the centuries people think that it was defeated and eventually people stop being vigilant and, whoops, suddenly it’s back and nobody’s prepared?

Well, we forgot to be vigilant, because American Idol is coming back. In real life.

Some people, at least, are excited about the revival.

Weeks ago, I had friends over and they had the hardest time parking because traffic was at a stand-still as people tried out for American Idol.

Think what you will about the show, but even people who don’t win can create massive audiences and become wealthy celebrities thanks to the fame that they accrue.

For a lot of people, a huge talent show might be their best shot out of living in poverty or working a dead-end job.

But for the show to work, it needs to be entertaining and fresh. It needs to attract a passionate audience and hold their attention.

Reportedly, Ryan Seacrest thinks that Kim Kardashian could be the key to doing that.

According to Star Magazine, Ryan Seacrest thinks that Kim Kardashian would make the perfect judge.

"While producers have been looking at Lionel Richie, Luke Bryan, Ke​ith Urban and other people within the music business, Ryan thinks the show should hire Kim."

We’d mentioned that they were considering Lionel Richie for American Idol.

"Promotion and social media are now just as important to being a successful artist as singing, and no one knows that world better than his pal Kim."

A portion of Kim’s fans might start watching just for her, and then get hooked.

A number of hate-watchers might also watch just for her … and then get hooked.

"People might moan at first that she doesn’t have experience with music but they did the same thing when Heidi Klum joined the panel at America’s Got Talent."

"At least Kim is from the USA, and she certainly knows how to make great TV."

Say what you will about Kim Kardashian, but she sure is from the US. Hard to argue with that logic.

"Ryan is worried that if they just follow the format of the old show, that it will feel dated. Adding Kim will be a game-changer."

Sure, it would be different.

We have to wonder if there’s more to this than Ryan Seacrest’s personal affection for the Kardashians.

Reportedly, American Idol producers are worried that Katy Perry will bomb after her gig hosting the VMAs didn’t go over well at all.

We don’t know how much better Kim would be, though.

Between Katy Perry and Kim Kardashian, you have to wonder if maybe they’re trying to attract a lot of people who like famously busty celebrities.

There’s one major factor that makes us seriously question whether Ryan Seacrest will get his wish and have Kim as a judge.

With two young children at home and another on the way via surrogate, Kim Kardashian has her hands full.

(Kim doesn’t want to confirm their surrogacy just yet, but she didn’t deny it … and what we’ve heard has come from reliably credible sources)

Does Kim really want to be taken away from all of that to be a judge on a talent competition show that might flop?

Sure, she’s rich and has nannies, but she’s still a mom and she loves her children.

Isn’t part of the whole point of being rich that you don’t have to make those kinds of sacrifices if you don’t want to?

Plus, Kim has plenty of money coming in thanks to her new makeup line and plenty of other branding deals.

She doesn’t need to take a high-paying job like becoming an American Idol judge.

(We guess that Ryan Seacrest wouldn’t rehash his old gripes about how much they pay Katy Perry, since Kim is his friend and this was his idea)

Kim doesn’t need that job and we don’t know if she wants it.

And we don’t know if American Idol‘s producers want her.

It will probably come down to demographic appeal at the judge’s table more than on actual ability to judge.

Like, if they go with Keith Urban, the one who’s a different person than Toby Keith (though have we ever seen the two in the same room at the same time?), they’re probably going for a rural crowd.

Katy Perry will doubtless attract a lot of, like, tween girl viewers who look up to her.

(We heard someone say: "every  year we all get older but Katy Perry fans stay the same age," and that really stuck with us)

Kim could bring in viewers, sure. But would they be the right viewers?

If this pans out, we’ll all find out. 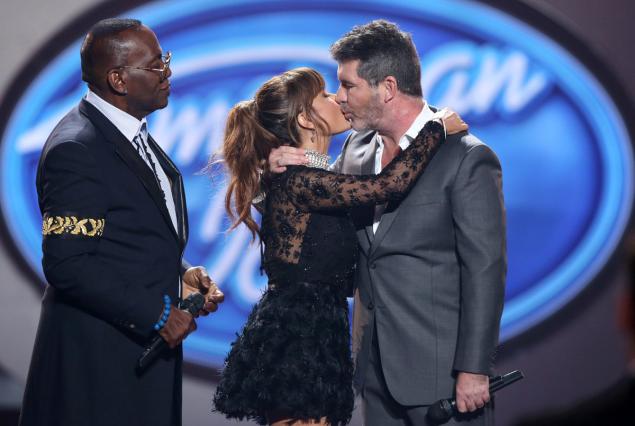 American Idol Finale: The Returns! The Performances! The Winner!