She’s calling out her roots. We’re wondering how a small amount of fabric constitutes a bikini.

New mom Coco Austin threw up an old photo of herself on a 1987 issue of Swimwear Illustrated, her very first magazine cover.

"Wow look at them roots!" she wrote.

"I was 18 here in ’97 This is when I slowly started dying my hair blonde.. I called it Peanut Butter back then..This was taken in Greece."

Naturally, every Tom, Dick and Harry had something to say about her body and plastic surgery.  Some had no idea which blond was Ice-T’s wife.

"I’ve only had my boobs done..and I actually have them done here..this was 18 years ago."

Austin wrote that at the time she was "really young" and a "tomboy."

A year after this shoot, Austin won the 1998 Miss Ujena contest in Mexico, and from there she appeared in catalogues, calendars and videos.

Rapper/Actor Ice-T, who married Austin in 2002, told the Daily Mail about their initial meeting.  Ice was on the set of a friend’s music video, and laid eyes on his bountiful future bride.

"It was her teeth, they were the first things I saw," Ice recalled.

"And then I saw her boobs. And then, when she turned around, that big butt," Ice said with a laugh.

"There was an instant physical attraction, but I was at a point in my life where I was ready to slow down.  "I wanted a partner. I wasn’t in a position to be dating a beautiful psychopath."

Fast forward fourteen years, and the couple are parents to daughter Chanel, born in November 2015. 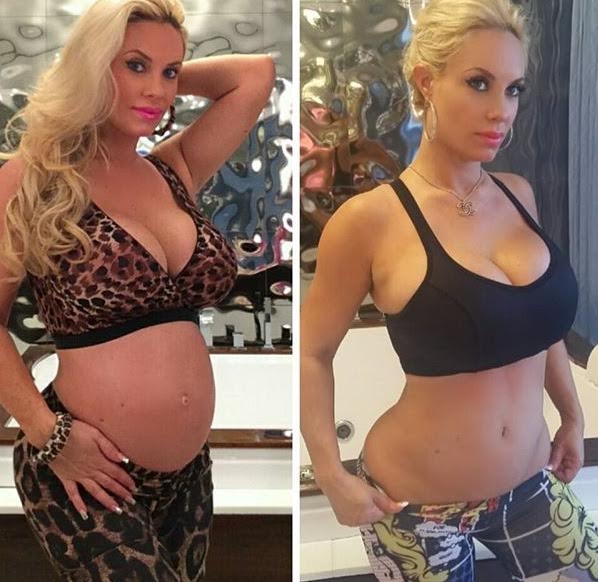 Coco Post-Baby: Pics of the New Mom & Her Bounce-Back Body