We never thought we’d say this, but:

Move over, Emma Stone! You have some serious lip-syncing competition from Anne Hathaway.

The Oscar-winning actress is featured in new teaser for an episode of Lip Sync Battle, Spike TV’s new hit series that pits celebrity versus celebrity in a battle of lip-syncing.

And while Justin Bieber as Ozzy Osbourne was impressive, no one may ever be able to top Hathaway’s performance.

As seen here, the Interstellar star does an amazing impression of Miley Cyrus, pretending to belt out the track "Wrecking Ball" while riding around on a wrecking ball.

And giving the middle finger to Emily Blunt for good measure.

The Anne Hathaway-Emily Blunt face-off airs on Thursday, April 9, at 10/9c on Spike TV. We’ll most definitely be tuning in for it.

Miley, meanwhile, came out with her scandalous Wrecking Ball video in September of 2013.

It centered on the singer, stark naked and swinging away; and it resulted in numerous reenactments across the Web, such as the time a hedgehog parodided the video. 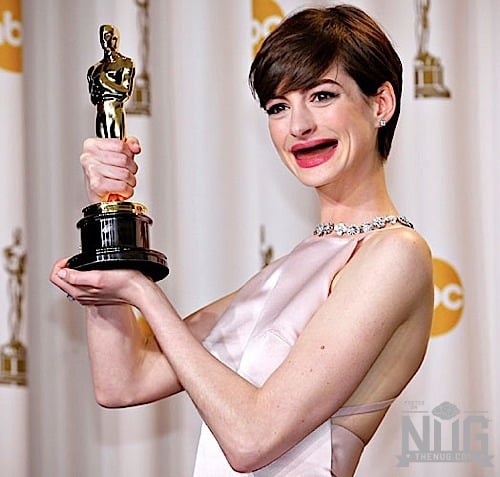