Shantel Jackson, Floyd Mayweather’s former fiancee, is suing the boxing champion for physically attacking and threatening her on several occasions.

According to Shantel Jackson, Floyd first got violent with her in 2012, not long after a domestic violence case involving another woman landed him in jail.

Jackson claims the couple were arguing when the fighter "twisted [her] arm, choked her and forcibly took her phone away from her to look through it."

She claims Mayweather got violent again in 2013 during a heated argument, bending her arm, restraining her, and POINTING A GUN at her foot.

Shantel claims he asked her "’Which toe do you want me to shoot?’" and demanded she remove her 17 carat diamond engagement ring at gunpoint.

Finally, Jackson alleges that Floyd got physical again this past February at his condo in L.A., grabbing her by the arm during another ugly dispute.

Shantel claims in that particular case, she was trying to walk out on him when things got testy, but he blocked her from leaving for more than an hour.

In May, the biggest name in boxing claimed when he posted said picture that the real reason the couple broke up because she aborted their twin babies.

She’s suing for assault, battery, defamation, invasion of privacy, infliction of emotional distress, harassment and more. We’re guessing for A LOT of money.

Floyd Mayweather may be illiterate, so he might need help reading the court filing, but he’s not lacking for sufficient funds to pay for a court battle.

Dude has made at least $72 million so far this year. THIS YEAR. He made this point during one of his many feuds outside the boxing ring (below). 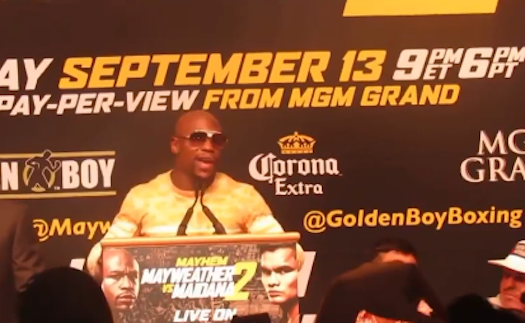