Amy Roloff is once again facing heat for…

…. posing for photos with her long-time boyfriend?

Sadly, yes. For this singular reason.

The two have been together for nearly all of 2017 and Marek has given social media users no reason to doubt his intentions when it comes to Roloff.

But this doesn’t mean they haven’t gone in search of some on their own.

Just over a month ago, for instance, Roloff shared what appears to be a simple, basic, harmless, cute picture of herself and Marek.

Yet a few followers didn’t take it that way.

"Big mistake, believe me, Amy can do better [than] him, he’s just in it for the game [and] getting his face out there," wrote one critic as an example.

What prompted this line of thinking?

We truly have no idea.

But it forced Amy to come out and defend Marek, as she even took a shot at her own reality show in the process:

"Try not to make quick assumptions about anyone from what you see on an edited show."

Then, just a few days ago, Roloff again posted some sweet pictures of herself and Marek, only to be told by some troll that she should "dump" Chris and "find someone new."

We remain confounded by all this disdain – but also almost impressed by the lengths users will go to in order to try and prove their misguided points.

Take the very first photo above, for example.

This is what Amy wrote as a caption to it:

What a great week bf Christmas week with getting together w/ good friends! This time of year reminds me What is beautiful about life – the gift God gave to us in Jesus, moments w/ friends, people you love, family, gathering around the table sharing , making moments to remember.

Have a good week ahead everyone.

And, amazingly/hilariously, this is what someone wrote in response in the Comments section of Instagram:

"Your[sic] in love… but doubt he is! More in love with himself and the show. Please Amy watch for the red flags! Don’t want to see you get hurt!”

Yes, this person is accusing Marek of purposely using his head to block Roloff’s face in the aforementioned image.

This person is then insinuating that this is a sign Marek is only dating Amy because she’s rich and famous.

The argument is obviously preposterous simply on its own.

But let’s break it down a bit, shall we?

First, Amy isn’t all that rich and famous.

We don’t mean that as any kind of insult; it’s simply a fact.

We’re sure she’s doing perfectly well for herself, but we can’t imagine she’s banking anything deep into seven figures per year or anything.

Second, Marek is a very successful real estate agent and has been for years.

He has no need to dig for any gold.

But try telling this to abusers of the World Wide Web.

"What a delusional person she is,” one hater actually wrote about Amy, adding:

“Left the old short man for a tall homeless unemployed tall ugly man… split after she took all of his money and property.”

For the record, not that this even needs to be said:

Amy did not take all of Matt Roloff’s money; and Chris has a home and is employed.

But thanks for playing, loser Internet person. 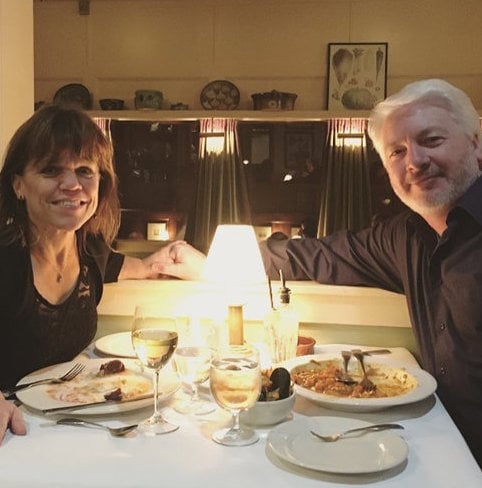