Jay-Z took a page out of Beyonce’s Lemonade playbook and dropped an album, 4:44, out of the blue that nobody can stop talking about.

Between the huge new revelations about Jay-Z’s cheating and Beyonce’s miscarriages, some otherwise big deals were contained in that album that really deserve a little more attention.

Like Jay-Z’s mom, Gloria Carter, coming out as a lesbian on the new album’s third track. Yes, really.

His lyrics in the song, "Smile," really spell things out.

"Mama had four kids, but she’s a lesbian, had to pretend so long that she’s a thespian. Had to hide in the closet, so she medicate. Society shame and the pain was too much to take."

We’re not just saying the phrase, "It gets better." We mean that the story told through these lyrics absolutely get more uplifting.

"Cried tears of joy when you fell in love. Don’t matter to me if it’s a him or her. I just want to see you smile through all the hate."

The song is "Smile" by Jay-Z featuring Gloria Carter, so yes, she absolutely makes her own voice heard in the track.

"Living in the shadow. Can you imagine what kind of life it is to live? In the shadows people see you as happy and free, because that’s what you want them to see. Living two lives, happy, but not free."

Again, this is Gloria Carter’s turn.

"The world is changing and they say it’s time to be free, but you live with the fear of just being me."

The world is changing, but like any civil rights movement, even the major milestones don’t necessarily change hearts and minds, and certainly not overnight.

And many in the LGBT+ community have to combat their own internalized homophobia.

That is, they’ll shy away from things like holding hands with a partner or attending Pride activities.

"Living in the shadow feels like the safe place to be. No harm for them, no harm for me. But life is short, and it’s time to be free. Love who you love, because life isn’t guaranteed. Smile."

Jay-Z was one of the first big names in the world of rap to openly support marriage equality, speaking out in 2012.

He described opposing marriage equality as discrimination (which it obviously is), akin to racist descrimination.

That may sound academic these days, but in 2012, Obama himself had only just begun to openly support marriage equality.

Back in 2008, and in every election beforehand, no major candidate could openly support the marriage rights of the LGBT+ community without being branded a "radical" by large portions of the electorate.

Bigotry is real, but cultures do get better over time. Little by little.

Unfortunately, there are almost certainly other women who are living Gloria Carter’s story.

Women who are raising children and afraid to come out as bi or gay because they don’t want their children to grow up with that stigma.

By releasing this track, Jay-Z can really spread how personally this impacts him and how homophobia can ruin lives.

By coming out, Gloria Carter has made a huge step for lesbians but especially for lesbians of color, who face homophobia, racism, and misogyny.

Today is the end of June and therefore the last day of Pride Month.

Did Jay-Z drop the album last night as much because his and Beyonce’s twins, named Rumi and Sir according to reports, are alive and healthy and so he felt free to tell the story of past betrayals and miscarriages?

Did he drop it so that his mother could celebrate Coming Out on the last day of Pride?

Or did he somehow balance his and Beyonce’s twins and the month of Pride and choose today as the perfect (or last viable) day for his album’s release?

Though … Lemonade still takes the cake.

(Even though it didn’t win Album of the Year) 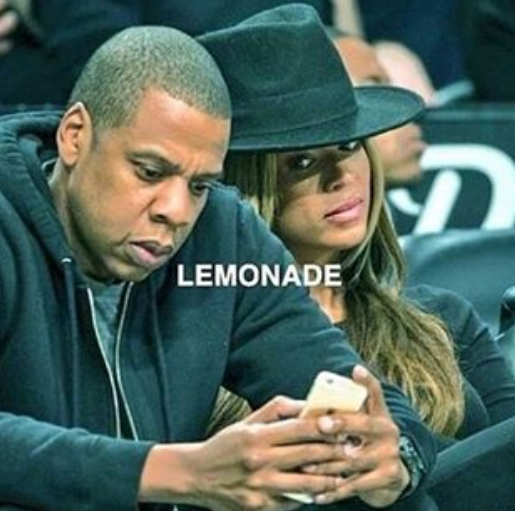