Alec Baldwin has always had a bit of an anger management problem, but while many seething stars mellow out with age, Alec seems to get more enraged with each passing year.

Baldwin was arrested in New York City recently for committing a traffic violation on his bike. The actor went quietly, but later slammed New York as a "carnival of stupidity" in a lengthy online tirade.

It was just the latest in a long line of bizarre, rage-fueled episodes for the actor, including an incident in November of last year in which Baldwin screamed anti-gay slurs at a photographer.

So even though little is known about why police surrounded Baldwin in the Hamptons this morning, you can be forgiven for assuming Alec’s temper was involved:

While Baldwin is not taken into custody in the clip, he can be heard raising his voice with officers and shouting, "I want this man arrested!"

We’re not sure who the man was or why Alec wanted him arrested, but we do it’s somewhat unusual for wealthy 56-year-old men to have multiple encounters with the police over the course of one year.

Alec’s recent brushes with the law are so numerous it’s becoming difficult to keep track of them all.

Regardless of the outcome, this latest encounter will now join the ironically named "Baldwin-Words With Friends" episode as further evidence that the once-respected actor is losing his grip on reality. 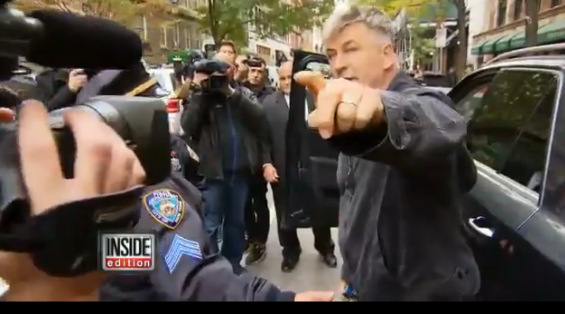