Caitlyn Jenner earned another distinction and have another inspiring speech on Saturday.

Both of these were far less controversial than Jenner’s ESPY Awards honor last July.

A little over a year since her groundbreaking interview with Diane Sawyer – in which Jenner admitted she is now living life as a woman – this conversation won Outstanding TV Journalism – Newsmagazine at the GLAAD Media Awards.

And Jenner was hand to accept the honor. 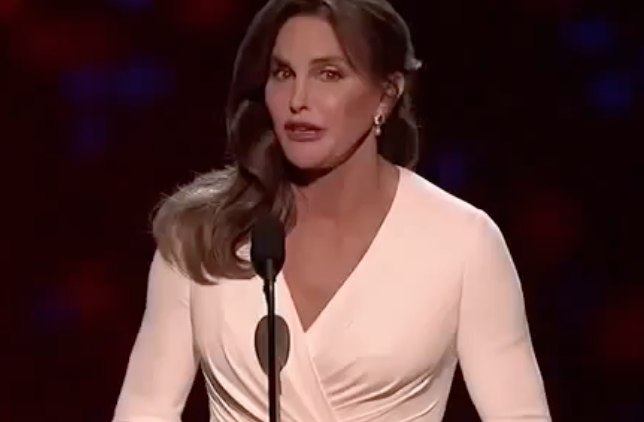 “First of all, I had been trashed in the tabloids for years," she said in her speech.

"I had paparazzi following me everywhere I went. The life was really horrible. When I decided after many conversations with my family, with God, about what I should do with my life, I called up my good buddy Alan Nierob, who [was] my PR guy many years ago.

"And he never said a word to anybody. He’s a good, trustworthy person. And I said, ‘How can we do this that we can elevate not just me, but this community?’"

The former Gold Medalist and current advocate for LGBT rights went on to explain how the interview with Sawyer came together, along with what it meant for various people around the globe.

She also focused on the impact it had on her children.

"My biggest concern was my kids," she said, explaining:

"Especially my last two, little Kendall and Kylie, who were 17 and 18 at the time. And I remember sitting there on the couch. I had Kylie on [my right side], Kendall on [my left side], and the show was getting ready to go.

"Within minutes after the show started, social media started to go crazy, okay? Celebrities – I think it was Lady Gaga was the first one, within 15 minutes of the show – with these positive comments. And the list went on and on and on.

"And, of course, I do live in the most social media family in the world by far. And I’ve got Kourtney, Kimberly, Khloe, Kendall, Kylie, everybody is there on the couch, with a reach of about 250 million people.

And it just really started it off. And I’m so indebted to Diane, to ABC, to Mark. To everybody involved with it.

Because, boy, it has been quite a ride for the last year. And there is nothing better in life, than living your life authentically. Thank you.

Watch the full speech below: