Aaron Hernandez, the former New England Patriots tight end who was found guilty of first-degree murder in 2015, has committed suicide.

According to prison officials, Hernandez hanged himself via a bed sheet while inside his cell at the Souza Baranowski Correctional Center in Massachusetts.

The 27-year old was just acquitted in a double murder case a few days ago.

His attorney even stating at the time that he believed Hernandez would also see his previous murder conviction overturned.

But it seem apparent that Hernandez did not agree with this assessment.

“Mr. Hernandez [hanged] himself utilizing a bed sheet that he attached to his cell window,” a representative for the Massachusetts Department of Corrections said in a statement.

“Mr. Hernandez was in a single cell in a general population unit.”

“Mr. Hernandez also attempted to block his door from the inside by jamming the door with various items.”

Prison sources say that Hernandez was discovered at 3:05 a.m. on Wednesday morning; those who came across his body tried to save his life at the time.

He was transported to a nearby hospital and pronounced dead at 4:07 a.m.

State Police are investigating the suicide and his family has been notified of what transpired.

Department of Corrections spokesman Christopher Fallon said Hernandez was not on a suicide watch because there was no indication he was considering harming himself.

He had not shown the typical signs of someone considering this course of action.

“If he had made any kind of statement, he would have not been in that unit,’’ Fallon told reporters.

He went on to say that investigators are poring over Hernandez’s cell in Unit G-2, yet thus far have not found anything that resembles a suicide note.

In April of 2015, Hernandez was found guilty by a jury of his peers of first degree in the death of semi-pro football player Odin Lloyd.

The former NFL star was also found guilty on gun and ammunition possession charges, receiving an automatic sentence of life in prison.

In an e-mail, Patriots spokesman Stacey James wrote that the team was aware of the death of their former standout tight end.

“We are aware of the reports, but I don’t anticipate that we will be commenting today,’’ James wrote of the tragedy.

(The Patriots are actually visiting the White House in celebration of this year’s Super Bowl win as we speak.)

Last Friday, Hernandez was found not guilty for the double murder of two men on a Boston street in 2012.

About a year earlier, however, he received his sentence in the Lloyd murder case, which was unrelated to those two killings.

Lloyd was a former friend who dated the sister of Hernandez’s longtime fiancee, Shayanna Jenkins (pictured above).

He was shot numerous times by the same kind of weapon security footage showed Hernandez possessed.

After the double murder verdict was read late last week and he was cleared, Hernandez turned to Jenkins and mouthed, “I love you.”

“I am very, very happy,” Shayanna later told the press of what had been decided in the courtroom earlier that day.

Hernandez was the father of a four-year old girl with Jenkins and played for the Patriots from 2010 through 2012.

He was such a rising star that he had just signed one of the biggest-ever contracts for NFL tight ends before his murder arrest.

A native of Bristol, Connecticut, Hernandez was a standout at the University of Florida before being drafted by New England. 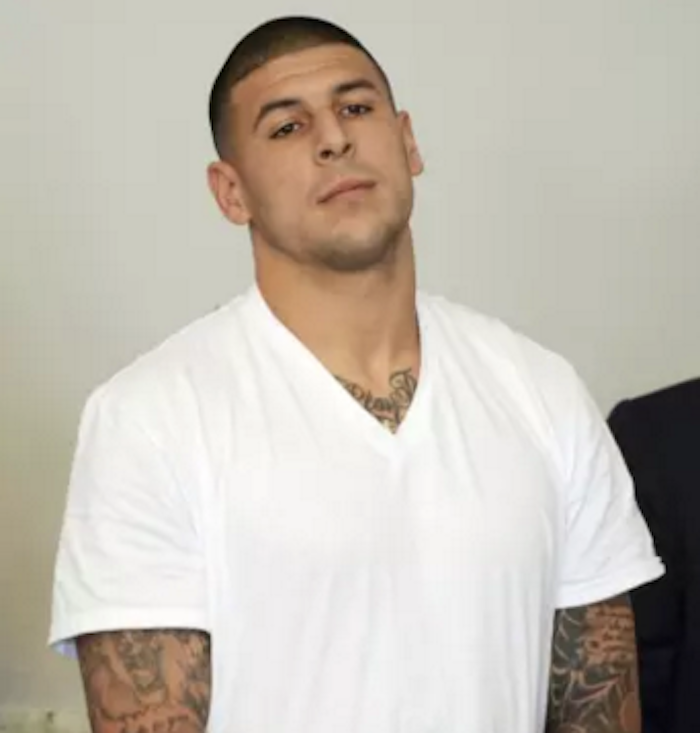