Over the weekend Golnesa Gharachedaghi – best known to those who watch Shahs of Sunset online or on television as "GG," for obvious reasons – shared some rather exciting news on Instagram:

But that isn’t all.

She got engaged in an especially unique, public and romantic manner.

The Shahs of Sunset beauty is set to exchange vows Dash Dolls’ Shalom, who popped his life-altering question in one of the world’s most famous tourist spots.

Gharachedaghi shared the following photo on Instagram yesterday, having snapped a picture of what Shalom posted on a Times Square billboard the previous night.

The message read: "Golnesa, My Love, My Everything… Will You Marry Me?"

And what did GG say?

Yes, of course! Just look at the engagement ring she included at the bottom of this image!

In case that huge rock didn’t make her answer obvious, GG wrote the following as a caption to this cute photograph:

"In the middle of Times Square… he asked… and I said… HELL YESSSSS! So happy to spend my life with him. I love you."

An insider tells E! News that the entire cast of the Bravo program flew to the Big Apple for the major surprise, as well as to support GG in her off-Broadway play, "Sex Tips For Straight Women from a Gay Man."

GG and Shalom have kept a bulk of their romance under wraps. They only went public about three months ago.

Overall, meanwhile, it’s been quite a busy year for the Shahs of Sunset family when it comes to the marriage and family department.

Then, in late October, Asa Soltan Rahmati announced that she and Jermaine Jackson Jr. are expecting a baby.

And then, mere days ago, it was revealed via The Daily Dish that Lilly Ghalichi is also engaged!

How exciting all around!

In other news: would you want to be proposed to in Times Square?

Would you find this romance or embarrassing?

And should we include the gesture in the following rundown of cringeworthy proposal fails and success stories? 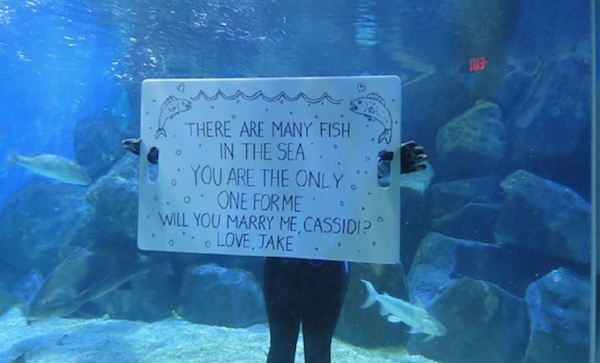 We’re very happy for the couple, don’t get us wrong.

We wish them a lifetime of happiness.

We’re just not sold on the way initial route they’re taking to achieve that goal.