According to police, via multiple media reports, the shooter opened fire just after 2 a.m. at Pulse, a popular gay club south of downtown.

The shooter held several people hostage for several hours, officials say, and around 5 a.m., police moved in to rescue the hostages.

"There are approximately 50 people dead inside," Orlando Police Chief John Mina tragically confirmed in a press conference this morning.

"At least 42 people have been transported to various hospitals."

Mina said the shooter terrifyingly "appeared to be carrying an assault-type rifle and a handgun. He had some type of device on him."

The shooter was not from the area, the police chief said.

Mina also noted that there was no indication the shooting was related to the Saturday morning shooting death of Christina Grimmie.

The Voice singer was killed one night earlier, also in Orlando, by Kevin James Loibl, who went on to take his own life after the attack.

Authorities do not yet know a motive for the club shooting.

"We consider this an act of terrorism," says FDLE Agent Danny Banks, who hinted at possible ties to radical Islam at a press conference. 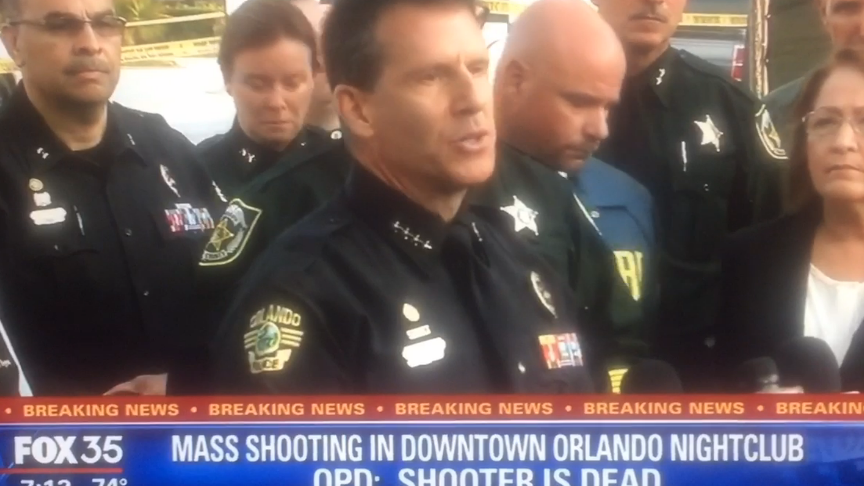 "We do have suggestions that that individual may have leanings towards that, that particular ideology," Banks said of this possibility.

At the same time, he cautioned not to assume that:

"We’re still running everything around."

Saturday was Pulse’s "Latino night." The club posted earlier "Calling all our Latinos, Latinas & everyone that loves a little Latin flavor."

During the shooting, someone posted from the club’s Facebook page telling everyone to run:  "Everyone get out of pulse and keep running."

Our thoughts are with the victims’ families.