Their divorce was kind of painful and took forever to settle, but that doesn’t mean Kris Humphries doesn’t still drool over photos of his ex-wife.

Kim Kardashian stripped down for the July cover of GQ Magazine, looking saucy AF in several different photos of the spread.

It almost qualifies as Playboy material.

Kanye West is reportedly so proud of the cover, but guess what?  Humphries loves it too!

The Minnesota native reportedly told his friends that Kardashian looked "scrumptious" on the cover, according to Hollywood Life.

"Damn. Just damn. Kris is kicking himself because Kim is sexy as f**k in her GQ cover and pictures,” a source close to Humphries told the site.

“To him, she’s stacked taller and looks more scrumptious than IHOP’s double blueberry pancakes. He’s loving everything about Kim’s spread.

I’m sure Kardashian loves nothing more than to be compared to pancakes, after having worked her ass off (no pun intended) to lose 60 pounds after having son, Saint last December.

"Looking at those pics is making him day dream about being with her again.

"And even though he and Kim aren’t on the best of terms,” the source pointed out, “he’s still admiring her body – just from a distance.”

Not to be outdone by the man who lasted 72 days, West sees Kardashian’s cover as perhaps her best yet.

“Kanye is in absolute awe of Kim’s GQ cover. He told her it’s her sexiest look so far and wants the photo blown up and framed on the wall,” a separate source told the site.

"He loves the simplicity of the black trench coat partially draping her and thinks the cover is a masterpiece, a work of art.”

Would you rather be a piece of art or a stack of pancakes?  Food for thought on this Friday morning. 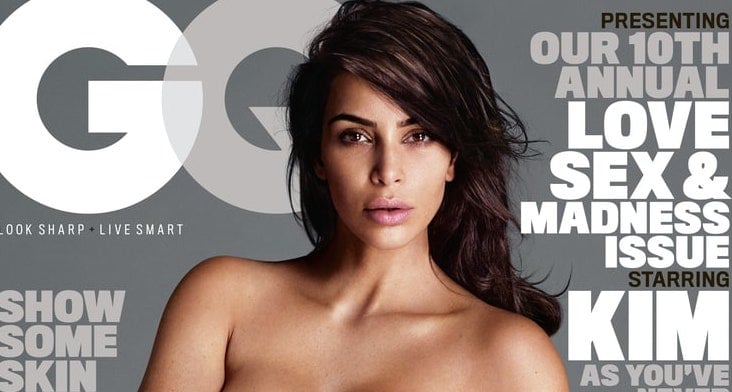