Along similar lines, her husband now says he’s serious about an announcement he made a few weeks ago: Yup, Kanye West really will be running for President.

The rapper first made this claim while accepting a lifetime achievement trophy at the MTV Video Music Awards last month, telling the crowd that he’s entering the 2020 Presidential race.

Hey, if Donald Trump can do it, right?

But did West really mean it?

“Oh, definitely,” he tells Vanity Fair, adding that people seemed supportive when he broke the news and rambling on about how much he has to learn.

"My dad has two masters degrees. My mom has a PhD, she used to work at Operation PUSH. Somehow the more and more creative I get, the closer and closer I get to who I was as a child.

"When I was a child, I was holding my mom’s hand at Operation PUSH. I think it’s time."

Soon after Kanye told the world his future intentions, it was definitely time for the Internet to have some fun with him: 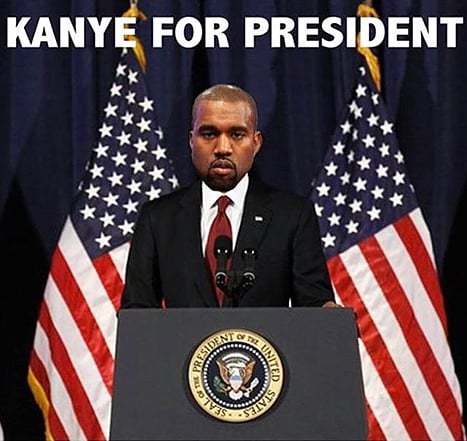 "I hate politics. I’m not a politician at all," Kanye adds.

"I care about the truth and I just care about human beings. I just want everyone to win, that’s all I can say."