Earlier today, we reported that Chris Brown and Nia Guzman would face off in court to determine who would receive custody of their 1-year-old daughter, Royalty.

It turns out, we were only half right. Nia showed up in court, and Chris was a no-show.

But don’t worry, he was still received the 50/50 joint custody decision he was hoping for, because the world is a terrible place and you can do whatever you want if you’re rich.

In fairnedd, Nia was swinging for the fences and asking that Chris receive only supervised visitation rights.

That might seem bitter and petty she aptly pointed out that Chris has a history of violence and does dumb things like bring Royalty on tour with him.

The judge wasn’t having it, and not only did he rule that Chris and Nia would share custody, he also decided that Nia will continue to receive $2,500/month in child support (She was requesting $15,000.) and must cease talking trash about Chris online.

Yes, Chris somehow raised Johnny Cochran and Robert Kardashian from the dead, because that is quite the victory for a guy who couldn’t even be bothered to show up for court.

You might be thinking that Chris couldn’t attend because he was busy touring, and you would be half right.

He performed in Dallas last night – and the hearing was three hours away in Houston today.

But don’t worry, Chris has finally made the trip. Royalty will be heading home with him this afternoon. And by "home," we mean to his next tour stop in Houston. 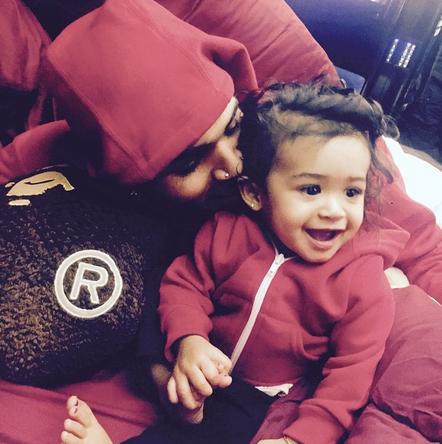