Nicolas Cage’s bad acting has finally caught up with him!

The actor who was once worth $150 million is reportedly running out of money and living in a small, Vegas condo.

According to The National Enquirer, Cage is living a modest condo and eating meals that average $8.95 at a diner.

A patron at The Cracked Egg witnessed Cage order and eat a plate of huevos racheros.  “Considering all the options of places to eat in Vegas, it’s incredible he comes here,” the witness said.

“Nic tries not to draw attention to himself when he’s here, but ironically that’s exactly what he does! No one else comes in with their hoodie pulled over their head. He’s obviously uncomfortable when he’s recognized.”

This is a far cry from the man who once made $20 per film and who lived a luxurious lifestyle.  At one time, he owned four yachts, a jet, multiple European castles, and several homes in the U.S.

However, six years ago, Cage owed the IRS millions in taxes.  As a result, he was forced to sell practically all of his assets.

Public records from 2012 reveal that he paid off his tax bill, and it looks like he is now taking a new strategy for spending.

His new rental condo is Vegas is humble—especially compared to the castles in which he once resided.

The actor, who was once married to Patricia Arquette and Lisa Marie Presley, now lives with his wife, Alice Kim, and their nine-year-old son.

Cage is currently worth roughly $18 million, but he and his family now live a more modest lifestyle and enjoy low-key meals at The Cracked Egg—where the most expensive dish is $12.95.

This modest lifestyle might be the humbling and healing experience Nic needs.  In 2011, Nicolas Cage was arrested for abusing his wife. Hopefully his "regular folk" life will knock him off his high horse. 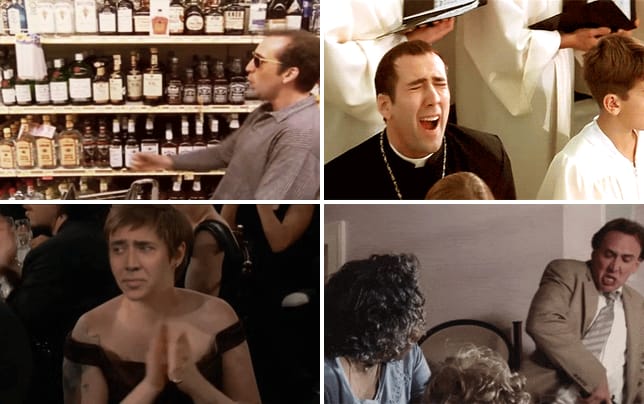